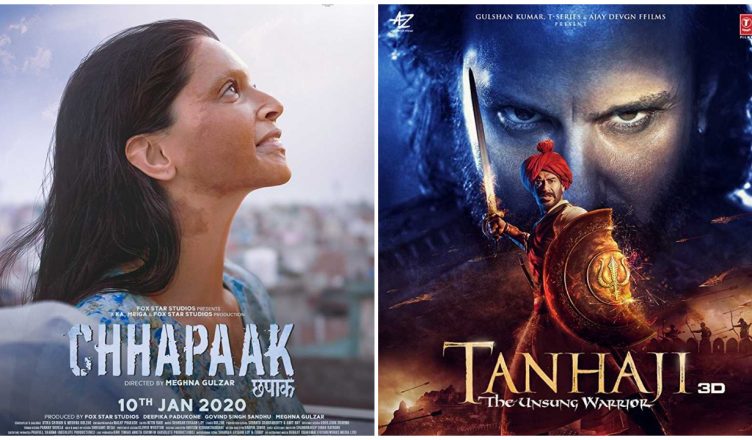 The unimpressive first week of January is about to get over. It was riddled with small releases, all of which flopped badly. The flow of big and important films begin from tomorrow, and that too with a clash. My analysis on the two films releasing tomorrow:

TANHAJI: THE UNSUNG WARRIOR: It is a war drama based on the life of the unsung hero Tanaji Malusare, who was a brave warrior in the army of Chhatrapati Shivaji Maharaj. Ajay Devgn plays the lead role along with Kajol as his wife. Saif Ali Khan plays the antagonist in this film, which is directed by Om Raut. The trailer is interesting and the makers have picked up a great story. Hardly anyone knows about this brave man outside Maharashtra. Moreover, the film is in 3D and that would add to the impact. Ajay looks in form while the war scenes seem entertaining. The film however has challenges. Songs haven’t worked much. Saif looks menacing but his act reminds one of Ranveer Singh in Padmaavat. Also, it comes at a time when audiences have already seen so many similar kind of period films like Manikarnika – The Queen Of Jhansi, Kesari and Panipat. Tanhaji: The Unsung Warrior also follows the same template in a way as even here, the ending is tragic, just like the other three films. The not-so-huge buzz in fact prompted the makers to release a second theatrical trailer. And not just that, they even came up with 15-16 dialogue promo videos. Many complained that the makers have divulged too much content of the film already. Nevertheless, since it’s a massy, star-studded film, Tanhaji: The Unsung Warrior will have an opening of around Rs. 10 crore. Also, since it’s Maharashtra-centric, it can have a great run in the state. If word of mouth is positive, it can emerge as the first Rs. 100 crore film of 2020, since next week there’s no competition.

CHHAPAAK: It is directed by the much respected Meghna Gulzar and stars an unrecognizable Deepika Padukone. She plays an acid attack survivor, inspired from the life of Laxmi Agarwal. The film has generated curiosity ever since Deepika’s look was revealed by the makers when the shoot was going on. Her transformation was unbelievable and added to the hype. The trailer was released last month and was well received. The content however is a bit niche. Hence, one can’t expect a record opening or 100 crore plus collections. Even then, the film can open at around Rs. 6 crore, with chances of it even crossing the Rs. 7 crore mark if viewers come out in big numbers in the evening. A section of people feel that Deepika’s visit to the JNU campus to protest against the violence on students will backfire and affect the film greatly. However, that won’t happen at all and the film can score big time, if content clicks.