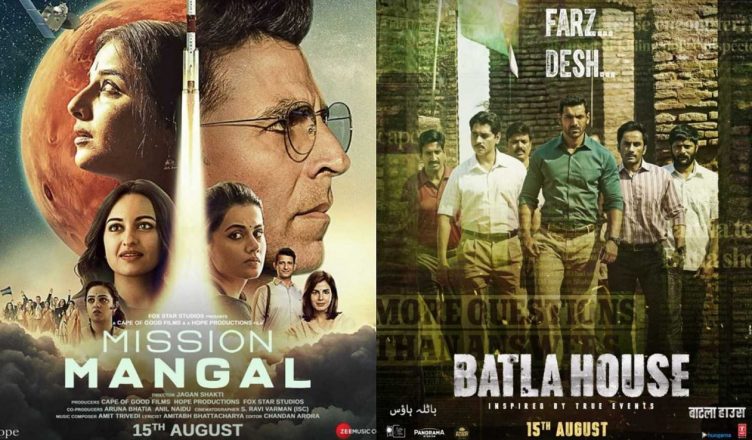 INDIA GETS READY FOR THE BIG INDEPENDENCE DAY CLASH!

India will celebrate its 72nd Independence Day tomorrow and as it happens every year, this special day will have a filmy touch. Last year on August 15, two films released, one headlined by Akshay Kumar – Gold and the other by John Abraham – Satyameva Jayate. This year, a similar scenario has emerged with both these top actors coming up with a film each. My analysis:

MISSION MANGAL: It is an ensemble multi-starrer featuring Akshay Kumar, Vidya Balan, Taapsee Pannu, Sonakshi Sinha, Kirti Kulhari and Nithya Menen. R Balki has produced this film which marks the directorial debut of Jagan Shakti. It is based on the Mangalyaan mission of Indian Space Research Organization (ISRO) of 2013 and how a team of women played a lion’s share in making it successful. The trailer of this film is very entertaining and it looks like a touching and exciting fare. Also, technically and visually, it looks like a rich product. Despite it being a space film, technical jargons are not used, as evident from the promos. As a result, audiences will be able to understand the film easily. Songs however haven’t worked. A small section of viewers are apprehensive if the simplistic narrative and humour will dumb down the content. Moreover, a big question mark is over the screen time of Akshay Kumar. There have been various media reports stating that the superstar has anywhere between 20 to 40 minutes of screen time in this 133 minute long film. If that’s true, then the film’s collections might be affected once the word spreads. But by then if it’s known that film is top class, then it shouldn’t be a problem.

The biggest opener of Akshay Kumar was last Independence Day’s release Gold at Rs. 23.63 crore. Mission Mangal will surely surpass this figure and open at anywhere between Rs. 25-27 crore. In fact, there’s a chance it can have an opening day collection of Rs. 30 crore!

BATLA HOUSE: It is based on a real-life incident involving an encounter by Delhi cops in 2008. The encounter was one of the most controversial as it raised questions as to whether the cops killed innocent students or terrorists. John Abraham steps into the role of DCP Sanjeev Kumar Yadav. Mrunal Thakur, Ravi Kishan, Manish Chaudhari and Rajesh Sharma are also seen in the movie. The trailer is gripping and gives out the correct vibe. It is directed by Nikkhil Advani, who has disappointed with his directorial films. But few of his films have been good, one of them was D-Day. And Batla House is in the D-Day zone. As a result, there are expectations.

Last year, on August 15, John Abraham-starrer Satyameva Jayate had hit screens and it was produced by Nikkhil Advani, coincidentally. It was a complete massy film with the ‘Dilbar’ song adding to the hype. As a result, it opened at Rs. 19.65 crore, despite Gold also having a record opening! Sadly Batla House doesn’t look as massy as Satyameva Jayate. Moreover, the item song ‘Saki Saki’, also by Nora Fatehi, hasn’t become that famous too. Due to these reasons, the opening of the film will be around Rs. 13-14 crore. But it has the potential to grow and emerge as a profitable venture, and hopefully John Abraham’s first solo Rs. 100 crore grosser!

WHICH FILM WOULD YOU LIKE TO SEE? DO LET ME KNOW!