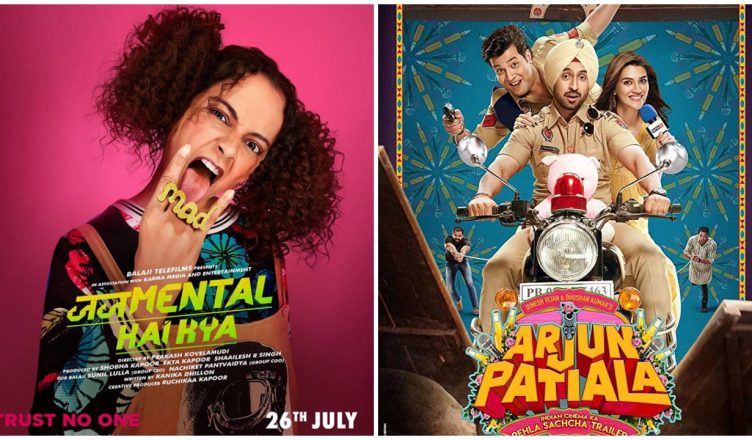 TWO QUIRKY COMIC CAPERS TO TRY THEIR LUCK THIS FRIDAY!

Conventional comedy is an established genre and there have been countless number of such films that have become commercial successes. But with changing times, filmmakers are feeling the need to give audience something different. This week will see the release of two films and coincidentally both are quite hatke comedies. Yet, both the films are different as chalk and cheese. My analysis:

JUDGEMENTALL HAI KYA: It stars Kangana Ranaut and Rajkummar Rao in leading roles and directed by Telugu filmmaker Prakash Kovelamudi. He is married to Kanika Dhillon, the popular writer of Kedarnath and Manmarziyaan and she has written this film’s script too. The trailer of this film is impressive and the way the characters are written is unique. There’s also a murder mystery element and that adds to the intrigue value. Both the leading actors seem in great form. Songs haven’t work with the promotional song ‘Wakhra Swag’ managing to get some attention.

The film however seems too unconventional. Also, buzz is quite low. The promotions couldn’t happen properly after a huge section of media boycotted Kangana Ranaut over her objectionable comments to a journalist at an event. The opening should be in the range of Rs. 3-4 crore and can go upto Rs. 5 crore if response is positive, which will draw people to cinemas in the evening. This will also help collections to grow over the weekend and then sustain in the weekdays. If response is not positive however, then the film will have a very tough time.

ARJUN PATIALA: This is a spoof comedy, on the lines of Deadpool, and stars Diljit Dosanjh, Kriti Sanon and Varun Sharma. It is directed by Rohit Jugraj, a famous name in Punjabi cinema, and produced by Dinesh Vijan who has now become a force to reckon with, especially after the success of Stree and Luka Chuppi. The trailer leaves one with mixed reactions. It seems funny and unusual but the execution has to be correct and shouldn’t go overboard. Or else it’ll fall like a pack of cards. Songs have got noticed a bit but it won’t be sufficient to draw audiences in hordes. The opening can be around Rs. 2-3 crore, with chances of better occupancy being more in the North due to Diljit’s presence. It’ll be tough for the film to succeed if the response is bad or even mixed.