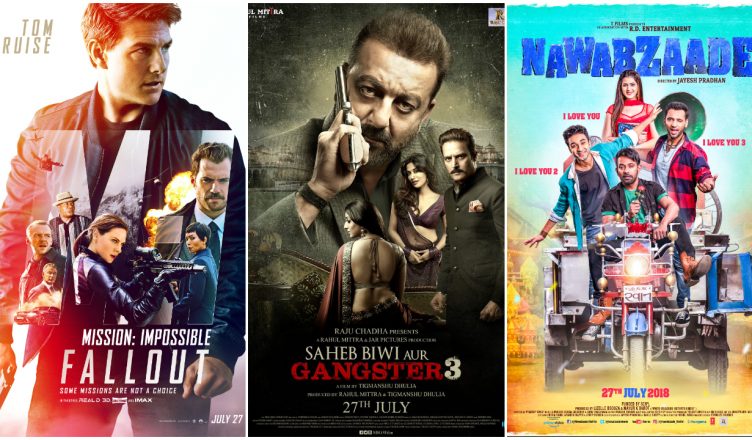 Last week’s release Dhadak, starring newcomers Janhvi Kapoor and Ishaan Khatter, has managed to do a fine job at the box office. The film grew in the weekends and sustained nicely during the week days. The first week collections are expected to be in the Rs. 51-52 crore range which is quite good for a film starring newbies. The film has the potential to cross the Rs. 75 crore mark as of now.

So will Dhadak get impacted by Mission: Impossible – Fallout? It all depends on the success of the latter’s dubbed versions. The Hindi version is usually for single screen and mass-dominated markets. In these areas, Dhadak is doing very well. So the success of Mission: Impossible – Fallout in these regions would mean Dhadak getting affected. If that doesn’t happen, then both these flicks can co-exist well.

Lastly, Nawabzaade also hits screens tomorrow. Starring the ‘dancer actors’ Raghav Juyal, Punit Pathak and Dharmesh Yelande, it is produced by Remo Dsouza. The trailer and the plot looks dated, reminding one of films like Dhol, Nayee Padosan etc. The songs however have worked big time like High Rated Gabru and Tere Naal Nachna. Varun Dhawan, Shraddha Kapoor and Athiya Shetty fearture in these tracks which helped in getting more traction. But many have mistaken these songs for singles and awareness has not spread well that it’s a part of Nawabzaade since the film and songs seem poles apart. A similar episode happened when Kala Chashma was unveiled and it became a chartbuster. But when Baar Baar Dekho’s trailer came out, the song didn’t seem in sync with the film’s theme and the film got very little benefit of the super hit promotional track. Nawabzaade too will suffer a similar fate.