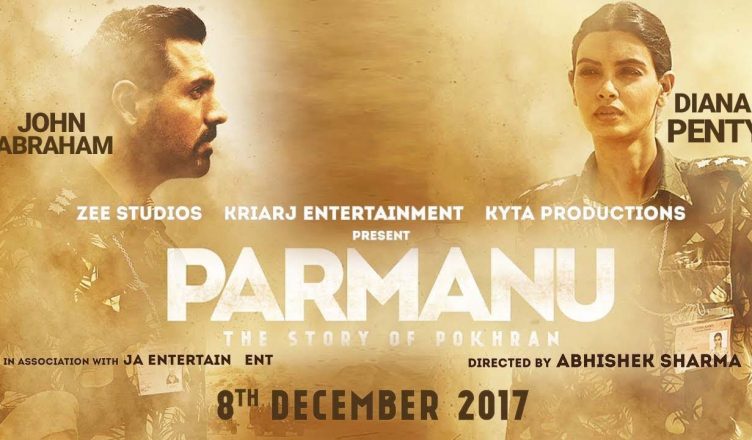 WILL THE LONG DELAYED, UNDER PROMOTED PARMANU GET ITS DUE?

Some 16-17 days ago, no one had a clear idea that tomorrow, the long-delayed flick of John Abraham, Parmanu, would release. After all, the film faced lot of legal issues but finally, John, also the film’s principle producer, emerged victorious.

Parmanu also stars Diana Penty and Boman Irani and is based on the nuclear bomb test explosions conducted by the Indian Army at Pokhran in 1998. The plot itself is quite incredible and the trailer shows that the film has some gripping, thrilling moments. It is directed by Abhishek Sharma, known for comic capers like Tere Bin Laden series and The Shaukeens.

Parmanu was shot last year and was to initially release on December 8. But when the big budget Padmaavat was scheduled to release just a week before, on December 1, it was pushed ahead to February-March 2018. This was also the time when KriArj Entertainment’s (then one of the producers of Parmanu) Pari, starring Anushka Sharma, was slated to release and as a result, Parmanu was further postponed to April 6. Meanwhile, reports were already floating around of trouble between John Abraham and KriArj’s Prernaa Arora. Finally, on April 1, John Abraham put up a public notice that KriArj Entertainment is no longer involved with Parmanu as he was upset with incessant delays and non-payment of dues. A war of words began between the two parties, with both slinging mud on each other. Prernaa Arora did it quite more, even predicting that John Abraham will become a laughing stock. Both parties went to the Bombay High Court and the judgment came in favour of John. On the other hand, it was a huge blow to Prernaa Arora and the perception was already against her. This is because besides the Parmanu row, she also had a public confrontation with director Abhishek Kapoor as well, who was co-producing Sushant Singh Rajput-Sara Ali Khan starrer Kedarnath with her. He too broke the association with her. With Parmanu and Kedarnath no longer in Prernaa’s kitty, she began to focus on her other two upcoming productions – Anil Kapoor-Aishwarya Rai Bachchan starrer Fanne Khan and Shahid Kapoor-Shraddha Kapoor-Yami Gautam starrer Batti Gul Meter Chalu. Shockingly, there were problems in these films too and Prernaa made an unceremonious exit from them as well. Prernaa Arora is now left with no film and she is expected to announce her next soon.

Coming back to Parmanu, the court order came around two weeks ago and on May 11, John Abraham announced May 25 as the film’s release date. He has tried his best in promoting the film as much as possible. However, the buzz is very limited. Some feel that the film needed at least one month’s time for promotions. But even then, it won’t have helped much. The subject of the film is not something that would get it a huge opening, even if the promotions had been there for a long time. Also, John Abraham doesn’t have a huge pull at the box office. Parmanu is a word of mouth film. The opening will be poor but if the reports are positive, it can get in a lot of viewers from Day 2. Thankfully, it has kind of got a solo release. With last week’s Deadpool 2 underperforming, it only has three-weeks old Raazi as competition and that won’t be a big problem. Parmanu looks great and here’s hoping all the struggles of John Abraham pay off well!

The other release of the film is Bioscopewala, based on Rabindranath Tagore’s classic story Kabuliwala. It stars Danny Denzongpa and looks quite lovely and poetic. Sadly, the excitement is negligible and in theatres, it won’t earn much. Hopefully, it’ll get recognition later on, on non-theatrical platforms.

WOULD YOU LIKE TO SEE PARMANU OR BIOSCOPEWALA AND WHY? DO LET ME KNOW!