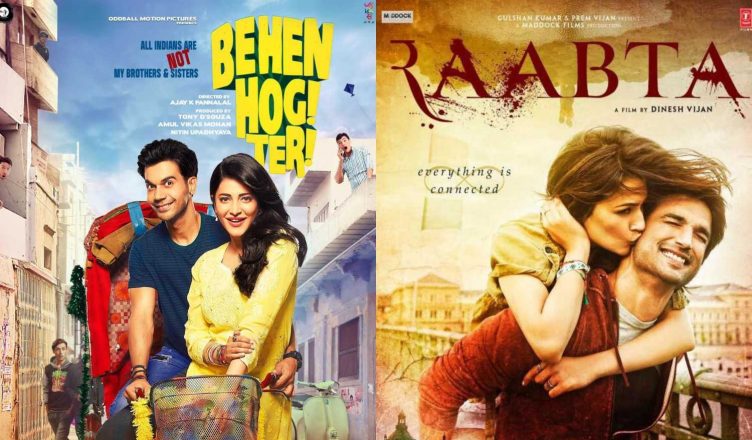 2 FILMS WITH WEAK CASTS TO TRY THEIR LUCK AT THE B.O. TOMORROW

Tomorrow will see the release of 2 films, both of which have weak star casts. These films are Raabta and Behen Hogi Teri. Interestingly, Raabta is a bigger and significant film because of its scale, lead pair and also because it has been in the news more than the latter.

Raabta stars Sushant Singh Rajput and Kriti Sanon and marks the directorial debut of producer Dinesh Vijan. It’s a love story but has a reincarnation angle as well. What’s interesting is that the makers very well hid the reincarnation bit from media and public. The on location pictures from Budapest were out but that only focused on the other track of Sushant and Kriti, based in present era. It’s only when the trailer was out in mid-April that the central idea of the film became known. Songs have got some recognition but not enough to pull audiences to theatres. The film has been in the news from the first schedule itself when reports came in that Sushant and Kriti are dating after the former broke up with his girlfriend, Ankita Lokhande. The actors have vehemently denied these stories and one can’t help but think if this was all a publicity stunt. However, a controversy that’s not a stunt for sure is the makers of S S Rajamouli’s 2009 film Magadheera accusing Raabta makers of plagiarism. Both films have similar idea and it’s only on Friday when Raabta releases that the truth will be known on this matter.

Behen Hogi Teri stars Rajkummar Rao and Shruti Haasan in leading roles. It’s a slice of life comedy and its trailer promises loads of fun and laughter. Even this film got into a controversy thanks to a scene in the film in which Rajkummar, dressed as Lord Shiva, is seen riding a two-wheeler. The hype for the film however is very limited and it’s all set to have a poor opening. Raabta, on the other hand, too won’t be any better and at best, an average opening is expected!

WHICH FILMS WOULD YOU LIKE TO SEE AND WHY? DO LET ME KNOW!