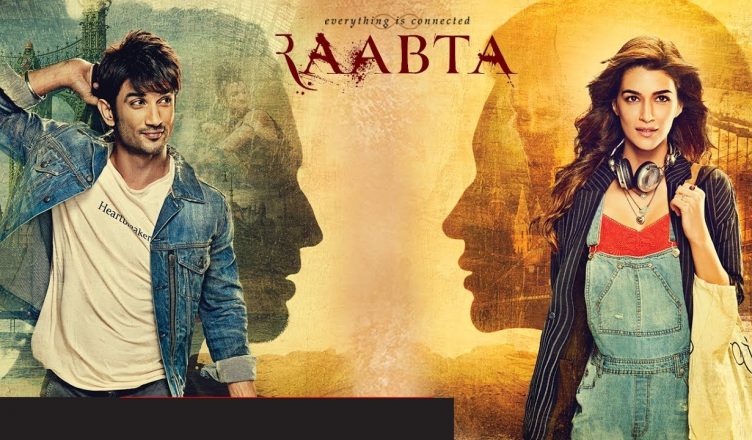 The reincarnation theme has been a top favourite amongst filmmakers and viewers since years in Bollywood. Two lovers getting separated due to an evil villain but avenging and getting united in the next life is an idea that can never go out of fashion. But it has to be made well. Raabta also deals with this idea but it’s badly made and hence the impact is zilch!

The story of the movie: Shiv (Sushant Singh Rajput) is from Amritsar who has recently shifted to Budapest after getting a job in a bank. He meets a cake-shop owner Saira (Kriti Sanon) and sparks immediately fly. All is going well until Zakir Merchant aka Zak (Jim Sarbh) arrives.

Raabta never really goes on a high. But the first half is decent and has its moments. The character of the flirtatious Shiv is well established. His first meeting with Saira and the sequence thereafter makes for a nice watch. The dinner sequence will surely make viewers smile although dialogues could have been better. The entry of Zak and his chance meeting with Saira gives an indication that the tension will escalate. And it does happen during the intermission point. However, post-interval, the film falls like a pack of cards when Shiv-Saira-Zak’s previous life is shown. This crucial track is badly written and executed and ruins the whole film. An important sequence out here is inspired from Baahubali’s first part. It should have taken the film to another level but the opposite happens. The pre-climax is average and fails to raise laughs. The climax is smart but predictable and gets over in a jiffy.

Sushant Singh Rajput is a fine performer who works hard on each of his character. Raabta is no exception but sadly, in some scenes, he overdoes it. Agreed that Shiv is an over the top personality but Sushant goes overboard in certain scenes. And as Jhalan (his character in the previous life), he fails to make any impact. Kriti Sanon is restrained and does much better. She looks like a million bucks and delivers a first rate performance. She is fine as both Saira and Saiba. Jim Sarbh does well as the villain in both tracks. Zak is mentally not stable and that aspect is subtly brought about by Jim which is praiseworthy. Rajkummar Rao plays a mysterious old-aged baba and he looks totally unrecognizable. But his character doesn’t have much to do and in a way, it’s wasted. That’s really unfortunate considering how hard it must have been for Rajkummar to get into the look. Varun Sharma as Shiv’s sidekick is as usual.

JAM8 and Sohrabuddin’s music is fair. Ik Vaari is the best track of the lot. Darasal is forgettable while the title song fails to make the desired impact. Sachin-Jigar’s background score is in sync with the film’s mood and theme. The instrumental tune of ‘Ek Ladki Bheegi Bhaagi Si’ is haunting. Kecha Khampakdee’s action is real and looks nice on screen. Martin Preiss’s cinematography is damn good and captures the locales well. Siddharth-Garima’s story is hardly unique. They could have added some excitement with their screenplay but they fail to do so, especially with the previous life track. Dialogues could have been funnier and sharper. In the previous life track, the dialogues are difficult to comprehend. Dinesh Vijan’s direction is fair and can do better if he is equipped with a better script. In case of Raabta, he has a not-so-great material at hand and moreover, he doesn’t add or lift up the scenes with his direction. The entire track of the previous life of the three characters is based in a place which looks like Europe. Even their clothes seem European but they are all speaking in Hindi. Things like these take the film further down. Also, Baahubali 2 magic is still fresh in people’s minds and Raabta doesn’t make even one-tenth impact of the former!

On the whole, Raabta has a fair first half which is not very exciting but makes for a nice watch. But the ‘pichhla janam’ track is disappointing and unexciting and ruins the film totally. It’s also disappointing to see a fine actor like Sushant Singh Rajput going shockingly overboard in some scenes. Thanks to its high costs, Raabta is sure to emerge as one of the biggest flops in recent times.