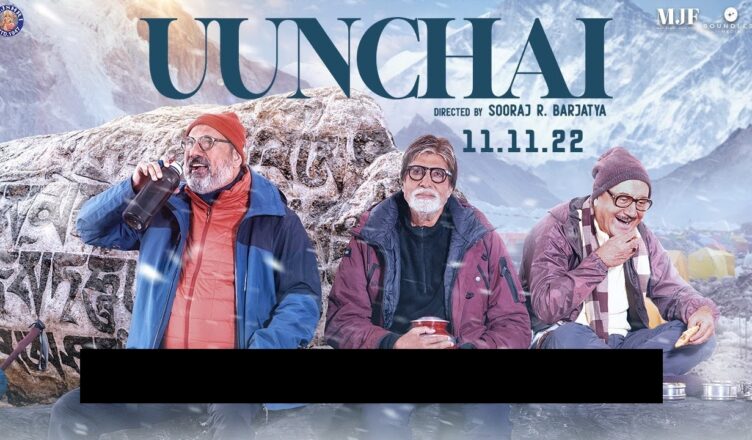 Uunchai, directed by the legendary filmmaker Sooraj R Barjatya, is a story of three old-aged friends who head to the Everest Base Camp, for the sake of their dead friend. Being a Rajshri film, Uunchai is filled with emotional moments and sweet and simple fun. The Nepal trek scenes are beautifully shot and it’s great to see Sooraj R Bajartya going out of his comfort zone and not making a typical film about a family. At the same time, he executes the film in an old-school style. Besides the principal track, there’s a lot that happens in the film and it gives viewers a wholesome, cinematic experience. The intermission point is too funny while the climax is exhilarating. Sadly, the film is too long (run time: 169 minutes). The music is poor while the long length and slow pace hamper the impact. Speaking of performances, Amitabh Bachchan is in top form as expected. Anupam Kher delivers yet another fine performance after The Kashmir Files. Boman Irani is dependable as always. Neena Gupta is adorable while Parineeti Chopra puts up an impressive act. Sarika has a crucial part and does well. Danny Dezongpa gives a fine performance while Nafisa Ali Sodhi is decent in a cameo. Sheen Dass (Heeba), Abhishek Pathania (Valli) and Raju Kher (Guddu bhaiyya) are okay. All in all, Uunchai deserves to be seen for the wonderful cinematic experience it provides. Despite its minuses, hats off to Sooraj R Barjatya for going ahead with its conviction and making a film he believes in, without falling prey to corporate demands. Here’s hoping the audiences give this film a chance in cinemas and that it emerges as a surprise success.