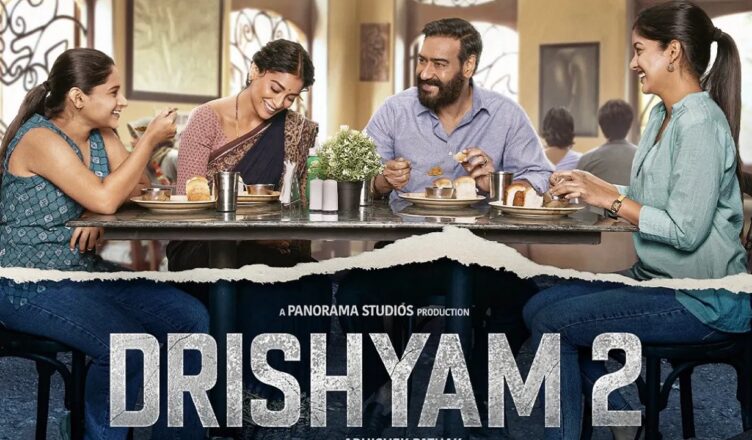 WILL DRISHYAM 2 GET A RS. 10 CRORE PLUS OPENING?

Last week, the box office saw a healthy improvement. Uunchai saw a huge jump over the weekends and has remained steady during the weekdays. At this rate, it might grow once again in the second weekend and will remain in cinemas for several weeks. Black Panther: Wakanda Forever underperformed but still will collect around Rs. 57 crores in the first week. And now all eyes are on this week’s release, Drishyam 2.

As the name suggests, it is the sequel to the acclaimed Drishyam. It starred Ajay Devgn, Tabu, Shriya Saran, Ishita Dutta and Mrunal Jadhav. The same star cast has been repeated, and Akshaye Khanna has also joined the star cast. The first part was directed by Nishikant Kamat, who had an untimely demise in August 2020. Abhishek Pathak has stepped in to direct the sequel.

Drishyam 2’s trailer is gripping and has been appreciated. Interestingly, both parts are remakes of Malayalam films of the same names. But the makers have assured that Drishyam 2’s Hindi version is not the same as the original film. And this is evident through the trailer as well. And anyway, very few people from the Hindi-speaking markets saw the original version as it is not available in the dubbed version. Reading subtitles is cumbersome for many and hence, they’ll prefer watching the Hindi remake.

What has also worked in Drishyam 2’s favour is that the first part was a huge hit in the world of memes. In part 1, Vijay Salgaonkar (Ajay Devgn) is shown cooking up a tale that he went to Panaji, Goa with his family on October 2 and had Pav Bhaji at a restaurant. This bit became viral and every year, on October 2, moviegoers remind each other of this aspect. This year, even the makers jumped onto the bandwagon. They began the advance booking on this day and it helped in generating excitement and even got some ticket sales.

Due to all these factors, the film’s advance booking has been healthy. It seems like the film will have a double digit opening, in the range of Rs. 11-12 crores. This will be huge for a film which is not a typical action or big-scale entertainer. Of course, one needs to lower their expectations in the post-pandemic world and hence, it’ll be better to expect Drishyam 2 to open between Rs. 8-12 crores. It’ll still be a feat as the first part’s collections were Rs. 5.87 crores on the first day.

There’s no major competition this week. Hence, if the word of mouth is positive, Drishyam 2 can have a weekend of around Rs. 40 crores. Then, it’ll be easier to beat the lifetime collections of Drishyam, that is, Rs. 68.66 crores. However, if reports are negative, it’ll fall on the weekdays. At the weekends, it’ll still hold up due to the popularity of the franchise and also because a section of moviegoers are curious to know what happens to Vijay Salgaonkar and his family, especially after how the first part ended.

The other Hindi release of the week is Mister Mummy. It stars the real-life couple, Ritiesh Deshmukh and Genelia Deshmukh. It tells an interesting story of a man who gets pregnant. However, the trailer hasn’t been liked and the poster has put off viewers. It’s getting a very limited release and even having a lifetime of Rs. 75 lakhs will be difficult for the makers.