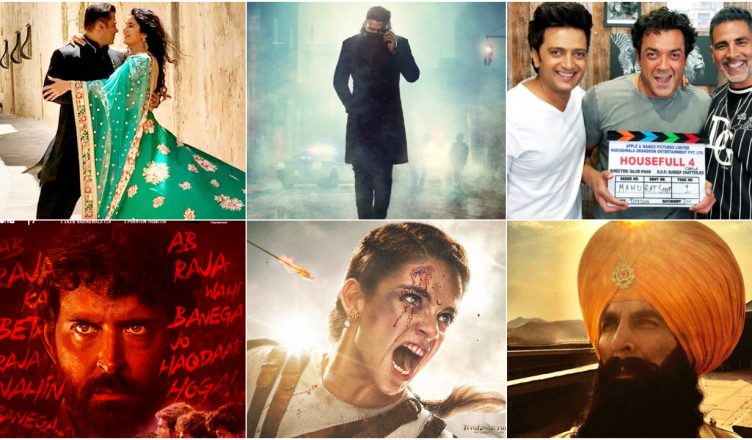 The Rs. 100-crore-club still exudes lot of awe and rightfully so. After all, getting into this club is still a task for many films. The Shah Rukh Khan-starrer Zero, for instance, struggled to reach the Rs. 90 crore mark with great difficulty. In 2019, there are some important films that can manage to get into this club and hence, will be seen with even more respect. The Vicky Kaushal starrer, Uri: The Surgical Strike, has already achieved this feat. Here’s a list of the other potential Rs. 100 crore grossers of the year.

1. Bharat
It’s a Salman Khan starrer and even in worst case scenario, his films cross the 100-crore-mark (Tubelight and Race 3 collected more than many other low-budget hits). And this film is directed by Ali Abbas Zafar. Together, both of them have given back-to-back Rs. 300 crore films like Sultan and Tiger Zinda Hai. Bharat doesn’t seem like a typical entertainer and is a remake of Korean drama An Ode To My Father. But with Ali at the helm of affairs and Salman as the lead, expect Bharat to be a big-screen, pan-India entertainer that can set the cash registers ringing!

2. Saaho
The success of Baahubali and 2.0 has proved that South films, if made and promoted well, can work wonders. Saaho is also expected to rock big time in this regard as it also stars Baahubali star Prabhas. The teaser and making video itself has upped the excitement. The film seems like a fast-paced action flick and moreover, it releases on Independence Day. Hence, it will have a four-day weekend and expect box office to be set on fire!

3. Housefull 4
It is the fourth film of the successful Housefull franchise, which is extremely popular on television too. And with Housefull 4, the makers have gone one step ahead as it’s a reincarnation double role comedy, a first in Bollywood. It releases on Diwali and that’s apt as it looks like a big dhamaka!

4. Super 30
Starring Hrithik Roshan, the film seems to be an inspiring tale on our education system and hence, it can touch parents and students across the country. With such a relatable tale and presence of superstar in lead role, the film can cross Rs. 100-crore-mark.

5. Manikarnika – The Queen Of Jhansi
It is an action, period drama featuring Kangana Ranaut as Rani Lakshmibai, the freedom fighter revered everywhere. Women-centric films were not expected to cross the Rs. 100 crore mark but last year, Alia Bhatt proved everyone wrong with her hit film Raazi. Manikarnika – The Queen Of Jhansi, seems more grand than Raazi and has that big-screen-watch feel and hence, this film can go on a high if all goes right.

6. Kesari
Besides Manikarnika – The Queen Of Jhansi, Kesari is another historical action drama that can work wonders. It tells the unbelievable story of 21 Sikhs fighting against 10,000 Afghans. Moreover, Akshay Kumar plays the lead role and if all goes well, this can be his first Rs. 200 crore grosser!

7. Tanhaji
This flick will complete the triumvirate of grand historical dramas that are based on brave stories of sacrifice. In this flick, Ajay Devgn plays the role of unsung warrior Tanaji Malusare. It can create riot in Maharashtra due to local flavour.

8. Total Dhamaal
The 2017 comedy Golmaal Again proved that clean comedies and multi-starrers have a lot of reach. Dhamaal is not a big franchise as Golmaal or Housefull. But it surely enjoys popularity and moreover, the star cast this time comprises of Ajay Devgn, Anil Kapoor, Madhuri Dixit along with the regulars like Jaaved Jaaferi, Arshad Warsi and Riteish Deshmukh (Ashish Chowdhry is missing this time). The trailer has made it clear that it can even make it to the Rs. 200 crore club!

9. Kalank
Multi-starrers are in vogue in 2019 it seems as Kalank too has an enviable star cast – Alia Bhatt, Varun Dhawan, Aditya Roy Kapur, Sanjay Dutt, Madhuri Dixit, Kunal Kemmu and Kiara Advani. If the plot is enticing and is directed well by 2 States director Abhishek Varman, there’s little reason why this Partition drama can’t be a big box office hit!

10. Batla House
The combo of John Abraham–Nikkhil Advani–Bhushan Kumar managed to breach the Rs. 80 crore mark with last year’s action flick Satyameva Jayate. This year, they can go a step ahead with Batla House, which is expected to be even more riveting and action-packed.

11. Mission Mangal
Akshay Kumar will be seen in a leading role in this entertaining and inspiring tale along with talented actresses like Vidya Balan, Taapsee Pannu, Sonakshi Sinha, Kirti Kulhari and Nithya Menen. This might not seem like a usual Rs. 100-crore-film. But 2018 has proved that well-made films with slightly niche appeal can also cross the Rs. 100-crore-film. As a result, expect this one to have an ‘out-of-the-world’ run at the ticket window!

12. Brahmastra
It’s a grand, fantasy movie starring Ranbir Kapoor, Alia Bhatt, Amitabh Bachchan and Mouni Roy. Directed by the much loved Ayan Mukerji, this flick can get into the top 3 or 5 huge grossers of the year. That it releases during beneficial Christmas period is like an icing on the cake.

13. Sooryavanshi
This film got launched uniquely with Simmba and has straight away created lot of buzz. It stars Khiladi Akshay Kumar collaborating with hit machine Rohit Shetty and this combo can surely ensure a blockbuster.

14. Hrithik Roshan-Tiger Shroff’s next
Another jodi this year that is immensely exciting is that of fit and dashing actors Tiger Shroff and Hrithik Roshan. The curiosity is really immense and it remains to be seen how both these superstars will be portrayed in this action flick.

15. Varun Dhawan-Remo D’Souza’s next
Their earlier association, ABCD – Any Body Can Dance – 2, was a Rs. 100 crore grosser. With this film, they are expected to go to the next level in terms of execution and technology. The previous two ABCD films were in 3D. This one will be in 4D and there are also talks of being released in IMAX. Katrina Kaif was to star opposite Varun Dhawan but she has stepped down, citing date issues. However, it won’t hamper the film much and expect this visual extravaganza to also dance its way into the Rs. 100-crore-club!