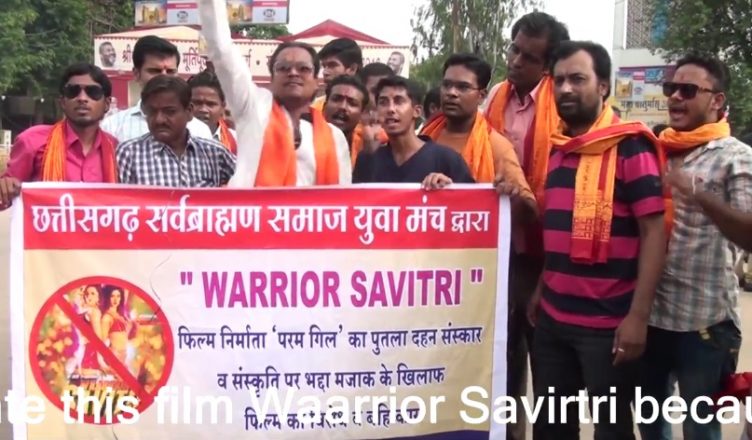 The small-budget film Warrior Savitri is all set to release in India tomorrow (August 25). The lack of buzz for the movie (despite the bold scenes, featuring Niharica Raizada) and tough competition from Tiger Shroff’s superhero flick A Flying Jatt has prompted the makers to take extreme measures it seems to ensure the film catches attention. And their attempt to do so is extremely laughable.

The makers themselves are spreading reports as to how the film has got into a controversy due to its bold content. A video is out showing a group of 10-15 people in Raipur burning the effigies of director Param Gill and shouting ‘Param Gill Murdabad’ and ‘Vande Mataram’ slogans. One look at the video and it’s becomes clear that the entire thing is staged. What’s more, the ‘leader’ of the pack talks to the media and seems intimidated by the cameras and boom mics. What’s also surprising is that Param Gill is no Rajkumar Hirani or Sanjay Leela Bhansali. He’s hardly famous and yet, the makers are chanting anti Param Gill slogans and that’s where they get completely exposed. After all, when PK landed in trouble, it was Aamir Khan who was targeted, not Rajkumar Hirani. When OMG Oh My God faced protests, did you ever see Umesh Shukla’s effigies getting burned?

The madness doesn’t end here. Param Gill and co-actress Lucy Pinder then claim that they were taken aback by the protests done by handful of people and hence, decided to not come to India citing security concerns. The protests have happened in Raipur (and in a few more towns, if we believe the producers) but Param further states that his effigies are burnt ‘across India’ and there are ‘heavy protests to ban the film’! Maybe, that’s what Param wants and he got confused between his desire and the reality while giving out the statement.

No matter how many effigies are burnt, Warrior Savitri is bound to be doomed. Nobody is interested in such controversies and the film will still take a poor opening. But alas, our makers will never learn. They’ll continue to make poor films and then plan such ‘protests across India’, hoping public will come in hordes to see the film. But such efforts are bound to fail, no matter what!