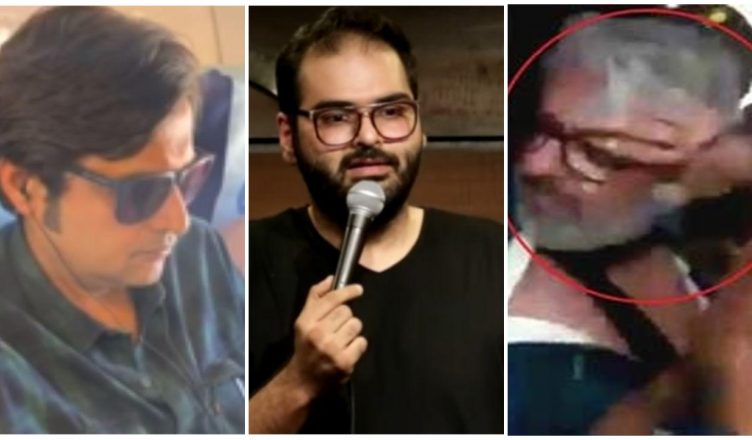 The internet exploded on January 28, 2020, after comedian Kunal Kamra, known for his critique on government, uploaded a video wherein he is criticising Republic TV co-owner and news reporter Arnab Goswami in an IndiGo flight. Throughout the length of the 1 minute 50 seconds long video, Kunal can be heard taking on Arnab and the latter being completely oblivious to it, wearing earphones and using his laptop. After he uploaded the video, Kunal also put out a statement wherein he claimed that he apologized to the pilot and the on board crew members for his behaviour. The video, as expected, went viral and evoked mixed reactions. Some congratulated him for his what they called bravado. The rest found it in a very bad and cheap taste.

Trouble arose when IndiGo put out a statement on the night of the same day that they have suspended Kunal Kamra from flying on their airline for six months as he indulged in ‘unacceptable behaviour’. Around 30 minutes later, Hardeep Singh Puri, the Union Minister for Civil Aviation, who was tagged by IndiGo in their statement tweet, made a response to their tweet stating, “Offensive behaviour designed to provoke & create disturbance inside an aircraft is absolutely unacceptable & endangers safety of air travellers. We are left with no option but to advise other airlines to impose similar restrictions on the person concerned”. One more hour later, Air India followed in the steps of IndiGo and suspended Kunal Kamra. They were joined by SpiceJet and Go Air the next day in putting indefinite restriction on the stand-up comedian.

As expected, the ones who hate Kunal Kamra to the core for being extremely critical of BJP, went into a celebration mode over these bans. The rest of them and even the more neutral ones were left shocked. Rightfully, many netizens reminded that graver acts have been committed by our politicians particularly on flights. A recent example is of BJP MP Pragya Thakur, who didn’t allow a SpiceJet flight in December 2019 to take off for 45 minutes because of a seat issue. A video is out showing disgruntled passengers blasting her for using her VIP status in an unfair manner. SpiceJet, however, took no action against Pragya. Then, 3 years ago, the case of the then Shiv Sena MP Ravindra Gaikwad slapping an Air India employee and even beating him with his shoes is unforgettable. The politician even bragged about in front of the media. He was put in an unofficial no-fly-list by airlines for around 9-10 days. He later stated in the Parliament that he regrets what happened and then went on to lie that he only slightly pushed the employee and that he never attacked him with his chappals! This white lie was enough for Air India and others to forgive him.

More and more analysis of the incident came to light as the day passed yesterday. It was revealed that neither Arnab Goswami nor IndiGo crew made any formal complaint against Kunal Kamra. Hence, this act of IndiGo suspending him was against the rules. Same goes for Air India, SpiceJet and Go Air, who shockingly and hastily also announced a suspension on Kamra though the incident didn’t take place in their aircraft! Arun Kumar, director general of Directorate General of Civil Aviation (DGCA), on record made it clear that the said ban is a clear violation of rules. A few hours, DGCA backtracked and claimed that such a ban doesn’t violate any rules. However, a quick Google search on the rules makes it clear that no due process was followed.

As I read through the material on this controversy and discussed it with friends, I was transported back to an incident that occurred 3 years 1 day before this incident. It took place in Jaipur where blockbuster and reputed filmmaker Sanjay Leela Bhansali was filming for his ambitious period film Padmavati. On January 27, 2017, protestors, belonging to an organization called Sri Rajput Karni Sena, descended on the sets and slapped the director. Their grouse was that Bhansali was distorting history. The film was based on brave Rajput queen Padmavati who committed ‘jauhar’ before she could be captured by Alauddin Khilji. The members of this violent organization made this attack on the assumption that there exists a romantic dream sequence between Padmavati and Khilji. Later, it came to light that no such scene existed in the script in the first place.

As expected, many right-wing fanatatics were overjoyed on hearing about the attack on Sanjay Leela Bhansali. They felt ‘he deserved it’ for messing up with history. Most of the industry remained silent. But the rest of the film personalities and most of the netizens demanded strict action against the attackers. Lokendra Kalvi, the founder of Sri Rajput Karni Sena, even admitted in front of the media that his men carried out the attack. However, the pro-attack group argued that no action should be taken since Bhansali never lodged a complaint. Also, the then Rajasthan CM Vasundhara Raje, also from BJP, never reacted to this attack though it occurred in her state. Again, the reasoning given was that how can she or Prime Minister Narendra Modi react to such ‘trivial matters’!

Now, let’s come back to Kunal Kamra row. Even here, as we mentioned above, Arnab Goswami never lodged a complaint. The same goes for the airline staff. Yet, the government in the form of Hardeep Singh Puri jumped in to criticize Kunal’s behaviour and ‘advised’ other airline to also ban him! To all those who got away by giving ‘no-complaint-means-no-action’ theory during Bhansali row, I’d like to ask all of them – what is your defence now?

It’s pretty clear why the government felt obliged to come in the defence of Arnab. The veteran reporter is known to be extremely close to the government. Most of the times, he is seen singing praises of BJP and defending its policies and criticizing the rest. There have been few instances when guests on his show have made it clear that he’s a BJP stooge; to which Arnab has blasted them and reiterated that he is a fair journalist. However, all these claims of Goswami can now go out of the window as anyone can make out that the government has come out to teach his ‘enemy’ a lesson on his behalf!

What Kunal Kamra did is unacceptable. Those supporting him will be upset if tomorrow the same treatment is meted out to their favourite anchors like Ravish Kumar or Barkha Dutt. They claim that even a Republic reporter did the same in a flight with Tejaswi Yadav but this is just making a whataboutery comment. Also, the manner in which they trended #BoycottIndigo and #BoycottAirIndia was foolish, especially since this same lobby was seen laughing over futility of a similar campaign #BoycottChhapaak two weeks back! However, one can’t deny that airlines have just bowed down in front of the government in placing these bans. They might get away now but in future, when a neta would indulge in such a behaviour (or even worse) and they’ll let him off, they’ll be taken to task by the netizens.