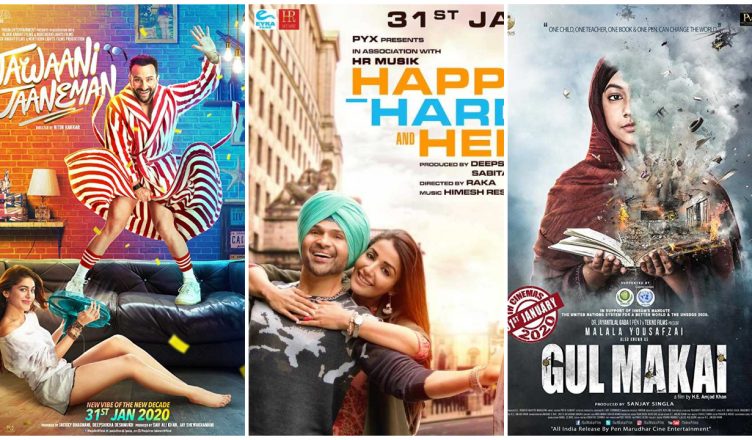 LAST DAY OF JANUARY TO SEE THE RELEASE OF NOT SO EXCITING FILMS!

The month of January is about to end and has been a bitter sweet one. Most of the films like Chhapaak, Jai Mummy Di and Panga have flopped. Street Dancer has been a shocking underperformer and might turn out to be an average grosser, if not a Flop. Only the blockbuster success of Tanhaji: The Unsung Waarior has given some respite. And tomorrow will see the release of three films, out of which only the first one has some chance while the rest will be washouts. My analysis:

JAWAANI JAANEMAN: It is the first film of Saif Ali Khan’s newly launched production company, Black Knight Films. Saif stars in this film in the lead along with Tabu, Kubbra Sait and Chunky Panday. Pooja Bedi’s daughter Alaya F makes her debut in this film and she plays Saif’s daughter. The film is directed by Nitin Kakkar, who has made acclaimed films like Filmistaan, Notebook and Mitron but has not tasted commercial success yet. The trailer is fine and the film can make for a good slice-of-life comedy, on the lines of Hollywood films. Songs haven’t worked as such, but the remix of ‘Ole Ole’ has got noticed. However, the film should have had chartbuster music as that would have helped. Right now, the buzz for the film is very limited. Also, Saif is not as exciting an entity as he was a decade ago. And Jawaani Jaaneman seems to be the film that he has done even before. He featured in Happy Ending in 2014, which was on kinda same lines – a middle-aged man that refuses to grow. That film, despite having hit music and Govinda, was able to open at Rs. 3.89 crore. Jawaani Jaaneman’s opening, meanwhile, would be in the range of Rs. 2-3 crore. It needs a very nice word of mouth to grow. And it has the chance as it comes in a nice week. Last week’s releases have not worked much and now even the blockbuster holdover release, Tanhaji: The Unsung Warrior, will slow down. So it has a nice one-week window to excel.

HAPPY HARDY AND HEER: It stars Himesh Reshammiya in a double role along with Sonia Mann. The makers have been promoting this film since almost 6 months. The trailer was put out somewhere in July 2019 without even unveiling the release date. The promotions continued for a few months. Then, Himesh got on board Ranu Mondal who became a sensation after a video of her singing a song on a railway station went viral. Sadly, her song for Happy Hardy And Heer titled ‘Teri Meri Kahani’ was mercilessly trolled by netizens.

Finally, the release date was announced to be January 3 which was then pushed to January 31. The film is being released in very few screens as the buzz is just not there. The songs haven’t worked and even the remix of ‘Aashiqui Mein Teri’, from 36 China Town, has flopped.

Not a single film of Himesh Reshmmaiya in the lead role has ever opened well, except for Aap Kaa Surroor, but again, it was not huge. It was an average film while the rest of his films like Karzzzz, Radio, Damadamm, The Xpose and Teraa Surroor have been huge flops. His lowest openers have been Damadamm (Rs. 14 lakh) and Radio (Rs. 16 lakh) and Happy Hardy And Heer will do slightly better than these films, in the range of Rs. 25-50 lakh.

The last film of the week is Gul Makai, based on the incredible story of Pakistani activist Malala Yousafzai. The trailer is surprisingly good and the film looks like an A-grade product. Divya Dutta and Atul Kulkarni play Malala’s parents in this film. However, the buzz is close to zero and the makers should gear up for negligible collections and cancelled shows.