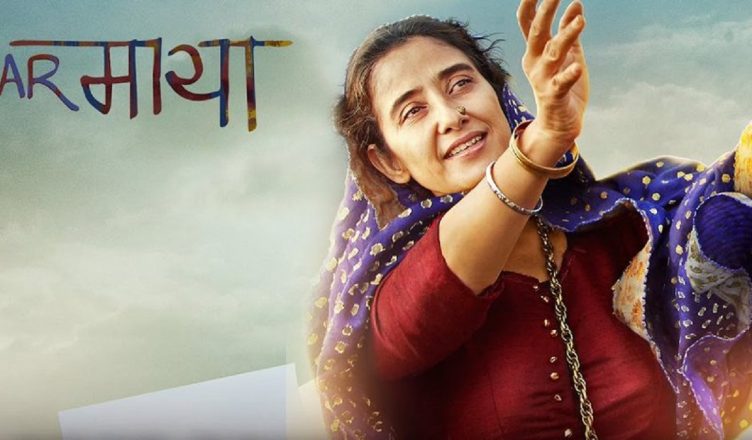 As kids and teens, almost all of us have been mischievous and have played pranks involving elders. In that age, we might have not realized and crossed the line while having fun. Dear Maya tells the story of 2 friends who do something similar resulting in disastrous consequences. Although it moves at a snail’s pace, Dear Maya has a lot going in its favour which makes it worth watching!

The story of the movie: Maya (Manisha Koirala) is a reclusive and a mysterious woman who stays in a huge bungalow in Shimla. Her neighbor is the school-going girl Anna (Madiha Imam) who is curious about Maya and her lifestyle. She and her friend Ira (Shreya Singh Chaudhry) decide to play a prank on her. They write love letters to her under the name of a fictitious guy, Ved. Maya’s life takes a turn as she reads those letters. She starts enjoying life again and she takes a drastic step, which shocks Anna and Ira.

Dear Maya has a great story to tell but the major issue is that it progresses very slowly. In a way, that helps in establishing the characters and the world in which they are based. Maya’s huge, lonely house is well depicted. Also, Shimla is nicely presented and in no time, one gets acquainted with Maya, location of her residence and that of Anna’s. It’s interesting to see how Maya changes for the better when she receives the letters. One of the best scenes here is she opening the windows, which have been closed for ages, and dust playfully flies in the air. Well shot scene! The intermission comes at a great point. Post-interval, the drama shifts to Delhi. The dramatic confrontations between Anna and Ira at this point are nicely helmed. The pre-climax is surprising and one expects the film to go on a high from here. Sadly, the flashback again slows down the narrative. It’s nice without doubt but half of it takes up too much of time, especially when it’s predictable to everyone. Thankfully, the film ends on a justified note.

Manisha Koirala is back on the screen after a hiatus and she delivers a fabulous performance. She doesn’t speak much but it’s her eyes that do the talking and it’s praiseworthy. She gets the character of a scared, distrusting, recluse perfectly – see it to believe it! Madiha Inam is excellent and in fact does as good as Manisha! She has a crucial role and in some scenes, she goes many notches higher. Shreya Singh Chaudhry has a slightly lesser role than Madiha but she too leaves a huge mark. She has a fine screen presence. Rakeysh Omprakash Mehra is terrific in a special appearance. The actor playing Rahul, Neel and Anna’s mother are good.

Anupam Roy’s music is melodious but sadly, doesn’t make much of an impact. Saat Rangon Se is the best followed by Kehne Ko. Buri Buri (by guest composer Sandman) is funky and is neatly relegated to the background. Roy’s background score is lovely. Sayak Bhattacharya’s cinematography is quite nice, especially in the Shimla sequences. Dolly Ahluwalia Tiwari’s costumes add to the authentic touch. Maya’s dull, black costumes leave an impact while Anna and Ira’s glamorous clothes are apt. Sanjeev Dutta’s dialogues are simple and effective, especially in the love letters portion. Sunaina Bhatnagar’s story is novel. Screenplay could have been better as it goes off track in the pre-climax. But her simple and straightforward direction works well. She could have done something about the pacing but all in all, it’s a worthy directorial debut!

On the whole, Dear Maya is a nice, intriguing fare and embellished with some great dramatic scenes and a bravura performance by Manisha Koirala. Newcomer Madiha Inam is the surprise of the film as she does a great job. The film moves slowly but it’s surely worth watching once for the above mentioned reasons and also for its underlying message!