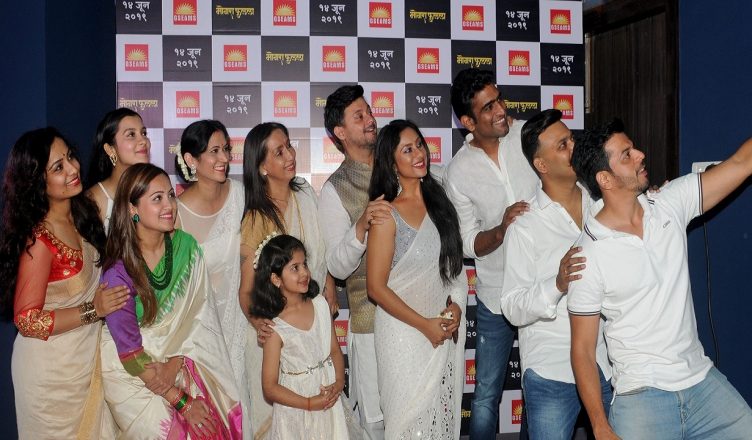 As we climbed the stairs towards Plaza Preview Theatre, we paused. The star of the afternoon – Swapnil Joshi – was right there, posing up for photographers as he posed with Mogara flowers. The message was clear – the talented actor was completely mood and all set to unveil the trailer of his upcoming Marathi film Mogra Phulaalaa. While the mini cinema hall is sufficient to launch the trailer of a film and house all the mediapersons and cast and crew, this trailer launch however was an exception. The number of mediapersons was unusually high. Moreover, most of the crew members and the sprawling cast were also present. As expected, there was overcrowding with many not even getting a seat. But the organizers were prompt and instantly arranged extra chairs.

As everyone settled down, it became clear that the homely feeling, which is the film’s USP, has also been recreated at the trailer launch. The event began with some laugh-a-minute riot gags of Sandeep Pathak. The cast of the film was then gradually introduced. The best part of the afternoon was experienced at this point when Swapnil Joshi and Neena Kulkarni spoke highly of each other. Neena, while explaining about her fondness for Swapnil, said, “I can’t look at him objectively.” Swapnil meanwhile emphasized, “She is an institution and yet she surprises in every project.”

Sachin Mote, the film’s writer, showed his humble side and it was heartening when he said that it was a high to know that the dialogues written by him were mouthed by Neena Kulkarni. Director Shrabani Deodhar gave a touching speech, highlighting her journey. She also remembered her deceased hubby Debu Deodhar, also assuring that though lead actress Sai Deodhar is her daughter, she has been casted because she fits the bill.

Sai Deodhar made quite a late entry to the podium but made up for it with her brief speech. Unlike other film events, the supporting actors of the film also were given a chance to speak up. The music team too shared their thoughts in the end.

Mogra Phulaalaa is the story of a simple, clean-hearted man who wants to get married but is unable to do so, chiefly due to his loving but controlling mother. Talking of his character, Swapnil Joshi in the press statement said, “I am in a different look in the film. The subtle story, melodious music and above all, talented direction by Shravani tai makes the film a must watch. The film gave me a lot of satisfaction while shooting and I am sure the audience too will be satisfied.”

Neena Kulkarni meanwhile stated, “I enjoyed shooting for the film as the director of the film Shravani is very dear friend of mine. I am doing a film with Swapnil Joshi after a long gap of about 14 years. Chandrakant Kulkarni is also playing an important character in the film and I have acted in some of very popular plays directed by him. It was a different experience working with him again. Mogra Phulaalaa is a very beautiful and sensitive story and gave me immense satisfaction in playing the role of the mother. I extend my special thanks to the producers Arjun Singh Baran and Kartik Nishandar for producing such a film.”

Finally, Shravani Deodhar said, “I am happy that I am making a comeback after a long time through this film (she has earlier directed some well-received Marathi films like Lapandav, Sarkarnama, Lekru). Mogra Phulaalaa is a love story woven very subtly. It revolves around a youngster who is engaged in the issues so much that he even forgets that he has well gone past his age to get married. He falls in love with very strong woman having an independent personality. She is very unique with an upbringing of a different kind. The love story progresses to an advance stage even before he realises that he is in love.”

Mogra Phulaalaa is produced by Arjun Singgh Baran & Kartik Nishandar of GSEAMS (Global Sports Entertainment And Media Solutions Private Limited). Producer of Fugay, Tula Kalnaar Nahi, Ranangan and presenter of Bhikari, GSEAMS is one of the top studios in Maharashtra. GSEAMS has also produced Nakalat Sare Ghadale on Star Pravah. Mogra Phulaalaa will be distributed by Panorama Studios, one of the leading producing and distributing company in Indian Film Industry and which has backed films like De De Pyaar De, Raid, Baazaar, Andhadhun, Satyameva Jayate, Drishyam, Pyaar Ka Punchnama 2, Gabbar Is Back etc.