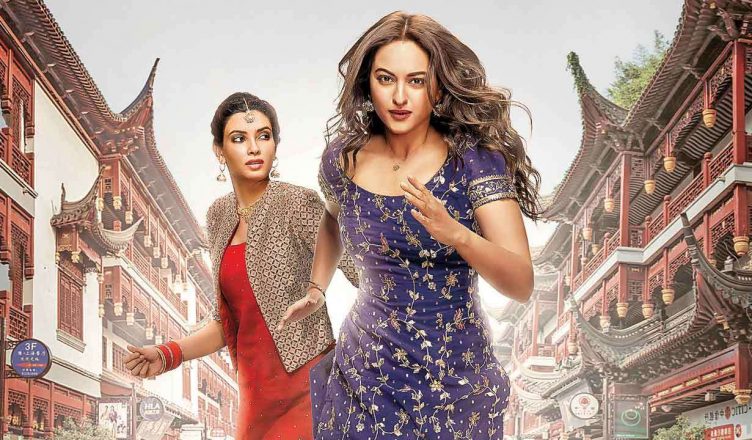 Every year, there are a couple of surprise successes – films that don’t seem that exciting prior to the release but turn out to be great entertainers and box office hits. Happy Bhag Jayegi was one such film of 2016. It released just a week after the big Rustom vs Mohenjo Daro clash and had a slow opening. But the word of mouth was encouraging and it sustained very well. Its lifetime collection was around Rs. 28.19 crore which is quite good for a film that opened at Rs. 2.29 crore.

The positive response prompted the makers to come up with the sequel, Happy Phirr Bhag Jayegi. The lead attractions of the first part were Jimmy Sheirgill and Piyush Mishra and both have been retained. The original ‘Happy’ Diana Penty and her lover Ali Fazal have a supporting role this time and they pass the baton to Sonakshi Sinha and Jassi Gill. In the first part, Happy accidentally ventures into Pakistani and in Happy Phirr Bhag Jayegi, the madness unfolds in China!

The trailer was unveiled yesterday and it has met with an encouraging response. The film looks hilarious and its dialogues are expected to bring the house down. The elements that made the first part a success – chaos happening in a neighbouring country, family-friendly genre, a munhfat Punjabi girl, effective performances – all are present in the sequel as well.

The opening is expected to be much better than the first part. It has Genius for competition, which is directed by Anil Sharma and is the debut of his son Utkarsh. The film looks very poor and Happy Phirr Bhag Jayegi would surely dominate. The genre and comic moments in fact makes it ideal for a festival release. Viewers crave for a movie that they can enjoy with their whole family during Diwali, Eid, Christmas etc. In that regard, Happy Phirr Bhag Jayegi is ideal. Festive releases always get an additional push due to the joyous mood and holiday factor. Hence, films that release during these periods always do a bit better. The Eid release of this year, Race 3, would have been a disaster had it not released during the festival. The money it earned during the first weekend saved the film from becoming a big-time flop. Similarly, films like Golmaal Again, Tubelight, Raees etc got a boost for releasing during the correct period.

In the past, we have seen some very ugly clashes happening when two biggies release on the same day. It not only leads to a divide of screens, but it also results in bad blood between the makers as they try every trick in the book to get more screens and outwit the other. However, when there’s a clash between a biggie and a small film, then things can be better. An example of this is the smaller film Secret Superstar releasing with the big-budget Golmaal Again on Diwali 2017. Initially, issues cropped up as Secret Superstar producer Aamir Khan tried to get half of the screens. But when he realized that his film doesn’t deserve that many screens, he gave it away to Golmaal Again. Both films did well, ultimately and there was peaceful co-existence from thereon.

At a time when clashes are becoming inevitable, such kind of measures would surely help and benefit one and all. Nevertheless, here’s hoping Happy Phirr Bhag Jayegi meets all the expectations and manages to do extremely well, despite being a non-holiday release!