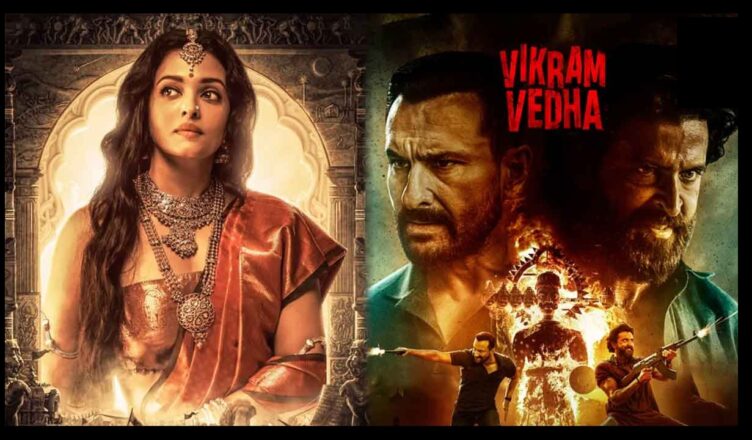 WILL VIKRAM VEDHA EMERGE AS ANOTHER HIT FILM OF BOLLYWOOD?

Brahmastra is a hit and has brought a lot of happiness into the industry. Now, all eyes are on VikramVedha, starring Hrithik Roshan and Saif Ali Khan. It is the 2017 remake of the same name and just the original version, it is also directed by Pushkar-Gayatri. Hrithik Roshan and Saif Ali Khan have stepped into the shoes of Vijay Sethupathi and R Madhavan respectively. Radhika Apte, Rohit Saraf and Sharib Hashmi also feature in this movie.

The teaser of the film was very well received and it made it clear that the film is promising. The trailer confirmed it. Many expected the film to open at Rs. 25 crores plus. However, it doesn’t seem to be happening and the first-day earnings should be in the range of Rs. 14-15 crores. As per the trends nowadays, the public is adopting a wait-and-watch strategy for this film. Hence, the advance booking is satisfactory but nowhere near Brahmastra. What has gone against the film is that it doesn’t look like an ideal family film. Also, the song ‘Alcoholia’ got noticed but didn’t become a chartbuster.

On the positive side, the response from the special screenings and media previews is unanimously positive. It has given hope that even if the morning and afternoon shows perform poorly, the film will pick up in the evening and night. Moreover, Sunday, October 2 is the Gandhi Jayanti holiday and then there’s Dussehra on Wednesday, October 5. The collections on these two days can be huge. Also, it has no competition till Diwali. Hence, if the public accepts the film, it’ll run in cinemas for 4-5 weeks successfully.

The other release of the week is Ponniyin Selvan – Part 1. It is a Tamil film, which will be dubbed in Hindi. Directed by Mani Ratnam, it stars Vikram, Aishwarya Rai Bachchan, Jayam Ravi, Karthi, Trisha, Aishwarya Lekshmi, Sobhita Dhulipala, Jayaram, Prakash Raj and others. Due to the sprawling star cast and association of A R Rahman and Mani Ratnam, the excitement for the Tamil version is incredible. Hence, it’s sure to have a record opening down South. The Hindi version, however, will struggle to cross even the Rs. 1 crore mark on Friday.

Finally, there’s Plan A Plan B on Netflix. It stars Riteish Deshmukh and Tamannaah Bhatia and is directed by Shashanka Ghosh. The trailer looks fresh and it can make for a nice romcom.