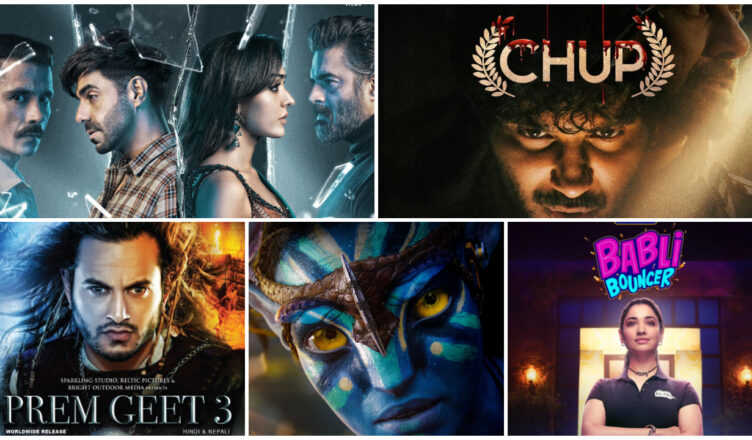 The Multiplex Association of India (MAI) has decided to celebrate National Cinema Day tomorrow, that is, Friday, September 23. As part of these celebrations, most of the multiplex chains will sell tickets for just Rs. 75. The tickets for the IMAX and 4DX versions will be available for only Rs. 150. The advance booking for tomorrow began on Tuesday, September 20, and the response has been fabulous. Brahmastra is the first choice and its shows are fast-filling or sold out. Surprisingly, even holdover releases like Sita Ramam, the Marathi film Boyz 3 and the Gujarati film Fakt Mahilao Maate have also managed to get a good response. And obviously, the new releases, too, are at an advantage. My analysis of the new releases:

1. CHUP: It is directed by R Balki and stars Sunny Deol, Dulquer Salmaan, Shreya Dhanwanthary and Pooja Bhatt. The film has been noticed due to the Guru Dutt element and also because it’s the story of a serial killer who kills film critics! The film looks niche but the marketing strategies have enhanced the hype. For instance, the makers held a free preview for aam junta in 10 cities on a Tuesday, 3 days before the actual release and one day before the press show. The response to these shows has been positive. Surprisingly, its advance booking has been solid and is the second preference for moviegoers after Brahmastra. As a result, its day 1 is expected to be Rs. 4 crores and might even cross the Rs. 5 crores mark. However, with so many people watching the film tomorrow, there’s a fear that the collections will be very low on days 2 and 3. But if the word of mouth is strong, the film can excel in the long run.

2. DHOKHA ROUND D CORNER: It marks the debut of Khushalii Kumar, Bhushan Kumar’s sister, and also stars R Madhavan, Darshan Kumaar and Aparshakti Khurana. It is the story of a terrorist who takes a woman hostage in her flat, not realizing that she’s not mentally well. The trailer is intriguing but the buzz for the film is limited. Yet again, it has become lucky due to the National Cinema Day offer. It’s expected to open around Rs. 2-3 crores.

3. AVATAR: The 2009 classic film is re-releasing tomorrow so that audiences can refresh their memory before they watch the sequel, which will be released in December this year. It was a much-loved film and deserves a big screen watch. Many didn’t see it when it was released the first time and few were not even born then. Due to these reasons and the offer, Avatar is expected to have around 75% occupancy in 3D versions and almost 100% occupancy in IMAX screens tomorrow. It can lead to an opening of Rs. 2-3 crores or even higher.

4. PREM GEET 3: This is the first Nepali film, which has been dubbed in Hindi. The first two parts of Prem Geet had a different story and were set in the present-day era. Prem Geet 3, meanwhile, is a period film. It has limited shows and is fast-filling, again due to the audience’s hunger to watch a film at Rs. 75.

Lastly, there’s Babli Bouncer, starring Tamannaah Bhatia and directed by Madhur Bhandarkar. It’s an original Disney+ Hotstar film and would be released on their platform tomorrow. The plot is impressive and can make for a nice family watch, if made well. Due to Disney+ Hotstar’s wide subscriber base, it’ll definitely get a lot of views.