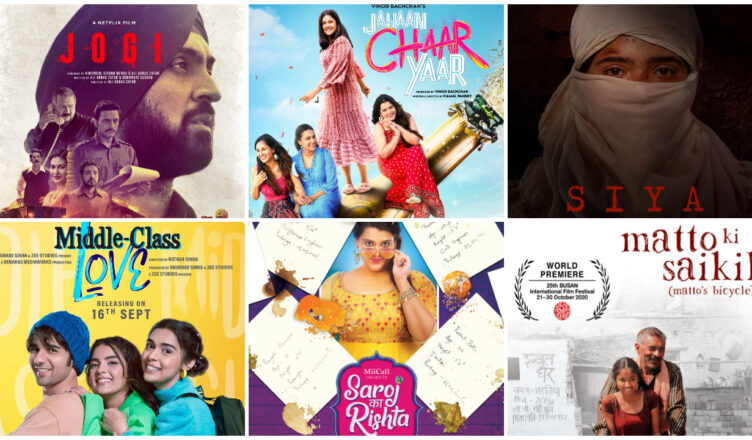 BRAHMASTRA SCORES AT THE BOX OFFICE; MULTIPLE FILMS TO TRY THEIR LUCK THIS FRIDAY

Last week’s Brahmastra emerged as a success. After the release of a biggie, producers of big or mid-sized films prefer to stay away, fearing that the big spectacle movie might eat into their business. Hence, this Friday, there’s no major release. Instead, multiple small films would try their luck at the box office though none of them has any chance. My analysis:

JAHAAN CHAAR YAAR: It stars Swara Bhasker, Meher Vij, Pooja Chopra and Shikha Talsania. It tells the story of four unhappy married women going on a trip to Goa. The concept is interesting. But the visual quality doesn’t look up to the mark and seems like a small-budget OTT film. It’ll have the best opening of all the films though it won’t be more than Rs. 15 or 20 lakhs.

SIYA: It marks the directorial debut of acclaimed producer Manish Mundra and stars Vineet Kumar Singh and newcomer Pooja Pandey. The subject is hard-hitting and the trailer packs a punch. However, it’s a very niche film and seems to be disturbing fare. The film has made a bit of noise on social media but it won’t translate into healthy box office numbers.

MIDDLE-CLASS LOVE: It is produced by Anubhav Sinha and directed by his wife, Ratnaa Sinha, who debuted as a director with Shaadi Mein Zaroor Aana. The film stars newcomers, Prit Kamani, Kavya Thapar and Eisha Singh. They look quite fresh and the intention of the makers is to pull the youth to the cinemas. However, the film has failed to generate any sort of buzz.

SAROJ KA RISHTA: It stars Sanah Kapur, Shahid Kapoor’s sister who was seen in Shaandaar. It tells a relatable story of a plus-sized girl who finds it difficult to find a man who’ll love her. Again, due to zero awareness, it’ll sink without a trace.

MATTO KI SAIKIL: It is a delayed film and stars filmmaker Prakash Jha in a leading role. It is the story of a poor labourer and how his life changes for the worse when his beloved cycle is destroyed in an accident. A subject like this is moving but has no chance in cinemas. The makers did promote the film and that’s when Prakash Jha slammed certain big Bollywood films, including Laal Singh Chaddha. This news became viral but sadly, no one talked about the film while reporting or discussing this news item.

Lastly, there is Khalli Balli, starring Dharmendra in a special appearance. The trailer is horrible and the film might have some chances in B and C Centres.

Lastly, the film that will make the maximum noise this week is Jogi. It will be released tomorrow directly on Netflix and stars Diljit Dosanjh. Ali Abbas Zafar of Sultan and Tiger Zinda Hai fame has directed it. It is about a Sikh family caught in the violence that erupted in Delhi in 1984. The awareness is limited as of now but the film will become a talking point after its release due to the subject and Diljit’s presence.