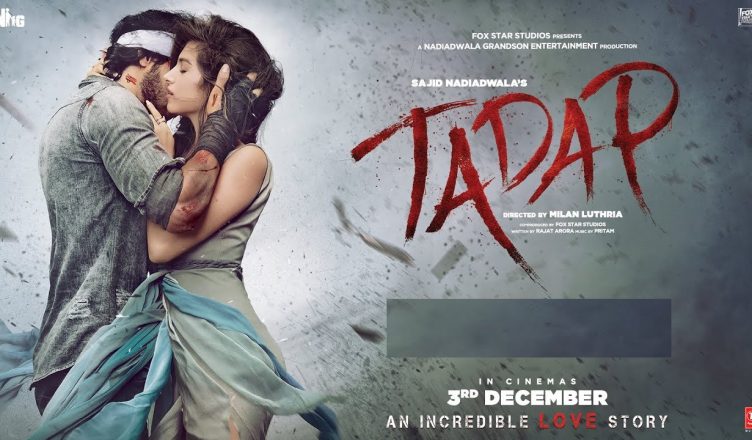 WILL TADAP TURN OUT TO BE A SUCCESS?

The month of November has been a great one for Bollywood in a long, long time. The much awaited film Sooryavanshi turned out to be a huge success. Its final lifetime collections are expected to be around Rs. 195 crore. Though Bunty Aur Babli 2 and Satyameva Jayate 2 emerged as flops but Antim, meanwhile, is a surprise hit. The film is holding very well and its lifetime earnings might be in the range of Rs. 38-40 crore or even higher, which is a solid result for this film that doesn’t have Salman Khan in the lead.

Now all eyes are on December and the first release of the month is Tadap. It is the launch vehicle of Suniel Shetty’s son Ahan and is produced by Sajid Nadiadwala. It is directed by Milan Luthria and also stars Tara Sutaria. Tadap is the remake of the Telugu hit, RX 100. The trailer is decent and the film looks like a commercial entertainer. The song ‘Tumse Hi Zyada’ has become a hit already. What has helped the film is that reputed people are associated with it, from Sajid Nadiadwala to Milan Luthria (of Once Upon A Time In Mumbaai and The Dirty Picture fame) to music director Pritam Chakraborty. Since Sajid is the producer, the film’s promotion has been great. Sajid Nadiadwala had launched Tiger Shroff successfully 7 years ago and now it remains to be seen if Ahan becomes as huge.

Tadap is getting a solo release. With Antim being the only competition, the film will have a huge screen count. Though the buzz is there, its limited. Most viewers would adopt a wait-and-watch policy. These are strange times and no one can exactly predict the collections of a film or even approximately, like in the pre pandemic days. Hence, one can only assume that Tada[ will open in the range of Rs. 1.50-3.50 crore range. If it manages to open above Rs. 2 crore mark, it’ll be a huge feat. And if it manages to collect Rs. 4 crore on day 1 as expected by some in the industry, then the producers should ideally throw a success bash immediately!