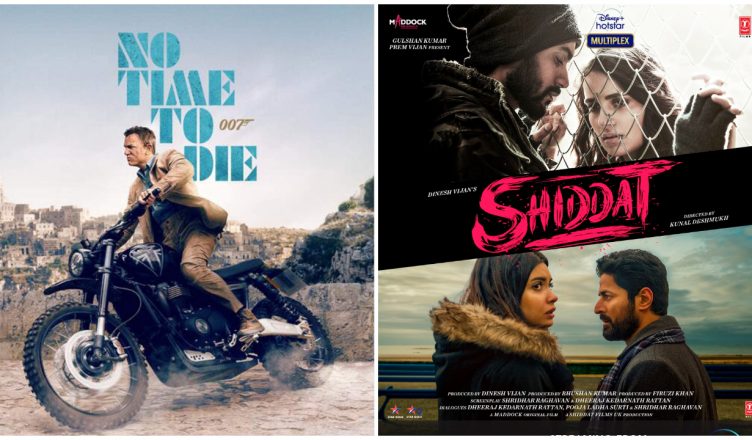 WILL NO TIME TO DIE COLLECT BETTER THAN SHANG-CHI AND THE LEGEND OF THE TEN RINGS?

We have been reporting since July 2021 about the multiple Hollywood films that have been released in India after the second wave subsided. And now, the biggest Hollywood release of 2021 will be out tomorrow – No Time To Die. It’s the 25th James Bond film and stars Daniel Craig, Rami Malek, LéaSeydoux and Ana de Armas.

No Time To Die was supposed to release in April 2020 but was pushed to November 2020 due to the pandemic. Since cases didn’t subside by November, it was again postponed, this time to April 2, 2021. And finally, it will now be released in the United Kingdom, India and many other countries on September 30 and in the USA and Canada on October 8. The film carries tremendous buzz as the trailers have been exciting. Also, it’s the last film of Daniel Craig in the role of James Bond. This has made it even more special.

In India, too, there’s a lot of hype for No Time To Die, even among the masses who’ll consume the film in dubbed versions. Another special aspect of No Time To Die is that it’s the first Bond film to release in 3D! This would further pull audiences to cinemas. Many Hollywood films had a delayed release in India and hence were out on pirated websites. As a result, films like Fast & Furious 9, Jungle Cruise, The Conjuring: The Devil Made Me Do It, etc could have collected far more but their business was not so encouraging since many viewers had already seen it in their homes.

However, the first release of September, Shang-Chi And The Legend Of The Ten Rings, had a release in India on the same day as in the rest of the world. Also, unlike other Disney films, it was not released simultaneously on digital. So, the pirated copy was not available on the day of release. Audiences had to go to cinemas to watch the film in all its glory. Skeptics had claimed that the collections would be affected as there’s a lot of fear over going to cinemas. But they had to eat their words as Shang-Chi And The Legend Of The Ten Rings opened at Rs. 3 crore in India, more than the day 1 collections of Akshay Kumar’s Bellbottom!

This shows that if there’s an exciting Hollywood film up for release and it’s not available online, viewers would come to see it in cinemas for sure. James Bond is loved by both the youngsters and the older generation. Hence, its opening might be higher than that of Shang-Chi And The Legend Of The Ten Rings. In three days, Shang-Chi And The Legend Of The Ten Rings had collected Rs. 10.75 crore and it remains to be seen if No Time To Die is able to cross this figure.

The other release of the week is Shiddat, which will premiere digitally on Friday, October 1. It stars Sunny Kaushal, Radhika Madan, Mohit Raina and Diana Penty and is directed by Jannat director KunalDeshmukh. The trailer is decent and the soundtrack has some melodious songs. The awareness about the film is low but it can find an audience as it’s releasing on Disney+ Hotstar, which has the maximum subscribers. Mohit Raina’s presence will also help once it’s out. He was seen in Mumbai Diaries 26/11, a recently-released web series by Nikkhil Advani. Audiences loved him in the show and his fans and admirers would definitely check out Shiddat to see him.