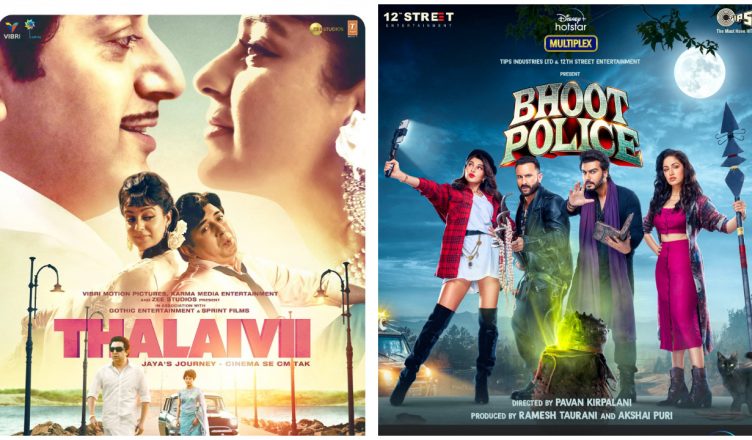 Due to prolonged lockdown for cinemas in Maharashtra, very few Hindi films have managed to release on the big screen. It started with Bellbottom on August 19 followed by Chehre on August 27. Both films were scheduled to release with the hope that Maharashtra, which contributes 30% of total all-India revenue, would open by August 15. Sadly, it didn’t happen and many films which were planned for a theatrical release in September have been pushed indefinitely. Thalaivii is the two of the last films that would release this season as of now, despite Maharashtra being shut.

This film stars Kangana Ranaut in the role of the iconic ex-chief Minister of Tamil Nadu, J Jayalalithaa. The film attempts to trace her journey from a famous film actress to one of the greatest political figures of India. The trailer was released in March this year as it was scheduled to initially release on April 23. But due to the second wave of Covid-19, it was postponed. The trailer is intriguing. Kangana’s off-screen persona has its share of lovers and haters but when it comes to her on-screen avatar, everyone agrees that she is one of the finest actors today. Hence, to see Kangana in such an author-backed role will surely pull audiences to some extent.

Sadly, Thalaivii will face some major problems. Firstly, the hype is negligible. The promotions have been very low-key and Kangana has not given any interviews or made conventional appearances on television shows. The makers have done the same mistake that was done by the producers of Bellbottom and Chehre, that is, not publicizing the fact that this film is releasing on the big screen. As a result, people are hardly aware that Thalaivii is releasing this Friday. Also, the subject is such that it’ll not easily attract audiences.

Another problem faced by the makers is that it might not be released in the major national multiplex chains. These chains contribute a huge chunk of business. But they have decided not to screen the film as it’ll release on Netflix 2 weeks after Thalaivii’s theatrical release. They believe that if audiences know that a film would release online within a fortnight, many might not go to see it on the big screen. Since the pandemic, the multiplexes and producers have jointly decided to release online 4 weeks after theatrical release. The multiplexes desire the same arrangement from Thalaivii as well. However, Thalaivii’s producer claims that he’ll bear a major loss if he releases it on digital after four weeks. He’ll be paid more for a release on Netflix post fortnight as opposed to a release post 28 days. He also said that at this point, box office figures won’t be encouraging and hence he needs revenue from Netflix to make the project feasible.

The multiplexes, however, have refused to budge. They feel that it’ll set a wrong precedent. If Thalaivii is given an exception, then many other producers would make a similar demand and as a result, the exhibition sector would suffer.

Till Wednesday morning, both parties have not been able to reach a consensus. If Thalaivii is released in multiplexes, then it can have an opening of Rs. 1-1.25 crore. Without these multiplex chains, its opening might be in the range of Day 1 of Chehre (Rs. 45 lakhs) or even lower.

The other release of the week is Bhoot Police. It’ll stream on Disney+ Hotstar from September 10. Interestingly, it was supposed to release on September 17 but on Tuesday, September 7, the makers announced that it’ll release three days later! The film stars Saif Ali Khan, Arjun Kapoor, Yami Gautam and Jacqueline Fernandez. The storyline seems interesting but the dialogues and treatment don’t seem up to the mark. If made well, it can make for a great horror comedy and would be lapped up by the youth.

Bhoot Police was shot last year during the pandemic. It was all set to release in cinemas, coincidentally that too on September 10. But due to the second lockdown, the producers decided to release it on OTT.