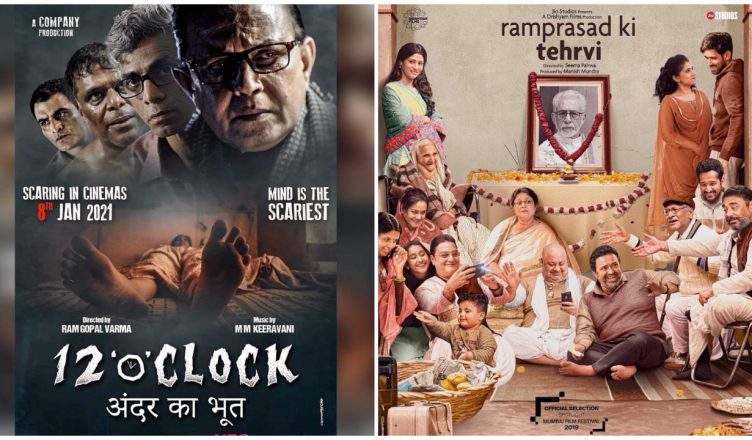 The year 2021 has started on an unexciting note. Till now, no big Bollywood film has been scheduled for release. The smaller films continue to release, that too, not every week but after long intervals. Last Friday, that is January 1, Seema Pahwa’s directorial debut Ramprasad Ki Tehrvi released in cinemas. As expected, the film hasn’t set the cash registers ringing. But surprisingly, it was a downright disaster either. Many multiplexes recorded fair occupancy of around 15-20%, even going to 35-40% in some shows. This is great since many feared that it might not even find an audience.

And tomorrow, Ram Gopal Varma’s horror film 12 “O” Clock will be released in cinemas. It stars Mithun Chakraborty, Makrand Deshpande, Manav Kaul, Dalip Tahil, Ali Asgar, Ashish Vidyarthi and Krishna Gautam. The film was shot last year, when the lockdown restrictions were lifted. In short, it went on floors less than 6 months ago and is now ready for release. However, the film looks extremely poor. Its poster makes one feel that it’s a B-grade film. There’s hardly any awareness about the film. Most ardent moviegoers have not even heard of the name of this film. There are no songs and there have been no promotional activities surrounding the film. The makers only released the trailer and few posters are expecting that it’ll do the trick.

The opening of 12 “O” Clock hence will be disastrous. It may find some acceptance in single screens or in the ‘B’ and ‘C’ centres where such films work.

Thankfully, the industry has a reason to smile next week. Tamil superstar Vijay’s much awaited film Master will be making it’s way to cinemas. It’s the first big Indian film to release since the lockdown was announced in March 2020. It will also be released in dubbed Hindi version and is expected to have a wide release. The excitement for it is tremendous and the trade is hoping that it’ll finally help in reviving the business. More on this film next week!