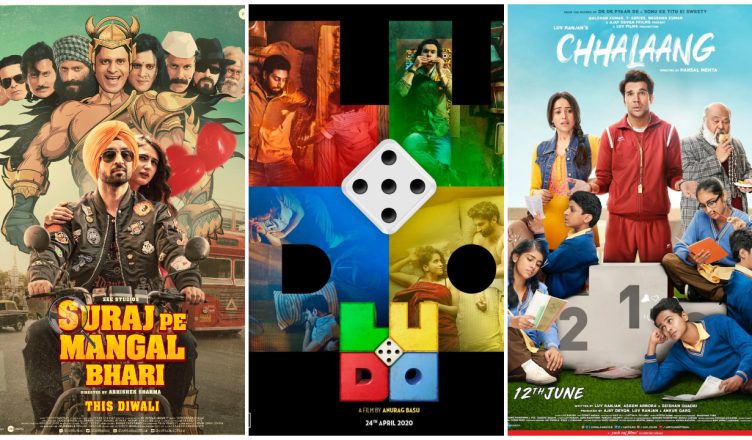 EXCITING WEEK AHEAD AS TWO FILMS RELEASE ONLINE AND ONE FILM FINALLY ARRIVES IN CINEMAS!

For nearly 35 weeks, there have been no new film releases due to the Coronavirus-induced lockdown. But now things are finally and slowly getting back to normal. This Sunday, November 15, shall see the release of Suraj Pe Mangal Bhari in cinemas, making it the first Hindi film to do so in nearly 8 months!

Suraj Pe Mangal Bhari is directed by Abhishek Sharma of Tere Bin Laden and Parmanu fame. It stars Manoj Bajpayee, Diljit Dosanjh and Fatima Sana Shaikh in leading roles and is essentially a comedy. It features Manoj as a wedding detective who specialises in finding flaws in the to-be grooms. One such disgruntled chap decides to take revenge from the detective by dating his younger sister. The trailer gives out a lot of the storyline but manages to impress. It indicates that the film would be a fun ride.

It is produced by Zee Studios and they were the first ones and till now, the only one to announce a theatrical release date of their film. However until 3-4 days ago, the theatrical release seemed dicey. This is because Zee laid some conditions in front of multiplexes. Firstly, they wanted the VPF (Virtual Print Fee) to go away. The VPF is charged by each multiplex to recover their investment in upgrading their technology. However it used to cost producers ₹20,000 for each theatre. They argued that the theatres have already recovered the cost and hence it should be stopped. Also the producers cried foul since VPF was not charged from Hollywood films. Secondly, producers wanted a larger share of revenue. And lastly, Zee wanted the window between theatrical and OTT release to reduce to as little as 2 weeks! Normally, it’s 8 weeks. This means that a producer has to wait for 50 days to release his film online.

The discussions over these issues went on and on. Finally on Monday, Zee announced that most issues have been resolved and that Suraj Pe Mangal Bhari is ready for release in cinemas. They have been tight-lipped about the new terms. But trade has speculated that Zee and multiplexes have settled for 50% revenue sharing. As for OTT window, Zee will release the film on Zee5 only after 8 weeks. But after 30 days, it can stream the flick on its pay-per-view platform called ZeePlex, as per trade. VPF conclusion is not out. However, UFO and Qube, which provides cinema viewing technology in single screens, have agreed to waive off VPF for the month of November.

The decision to release Suraj Pe Mangal Bhari on Sunday has raised eyebrows. But it probably was done for two reasons. Firstly, the discussions took a lot of time. 3-4 days would have been quite less for any producer to get his film to cinemas. Secondly, Friday November 13 is pre Diwali while the next day is the day of the Festival Of Lights. Audiences usually stay away from theatres on these days as they are busy with Laxmi Puja and other such festivities. And with the pandemic still going on, anyway a large turnout is not expected. Hence, if it had released on November 13 poorly, it would have sent a wrong message. November 15 is a holiday and so is Monday November 16. If all goes well, then audiences should flock in huge numbers. After all, they have not seen a new film in theatres since ages and are desperate to come back. At the same time, however, the buzz and awareness regarding the film is very low. The opening hence might not be encouraging. But if word of mouth is positive, it can work as it also has a first mover advantage.

Meanwhile two films will be released on digital platforms. Tomorrow (November 12), Ludo will arrive on Netflix and it is directed by Anurag Basu. It is on the lines of his 2007 film Life In A Metro. But unlike that film, Ludo is a quirky crime comedy. It has multiple stories and also has an ensemble cast comprising Abhishek Bachchan, Aditya Roy Kapur, Rajkummar Rao, Pankaj Tripathi, Sanya Malhotra and Fatima Sana Shaikh. The trailer surprisingly is great and it can make for a great watch.

And lastly, Chhalaang will release on Amazon Prime on November 13. This film stars Rajkummar Rao, Nushrratt Bharuccha and Mohd Zeeshan Ayyub and is directed by Hansal Mehta. Hansal is usually known for serious fares. Even his recent venture, the celebrated web series Scam 1992 was a no nonsense fare. But Chhalaang is a light hearted comedy set in a North Indian school. The trailer is decent and nothing special. It’ll have to be really good to stand out and only then it’ll get it’s due.