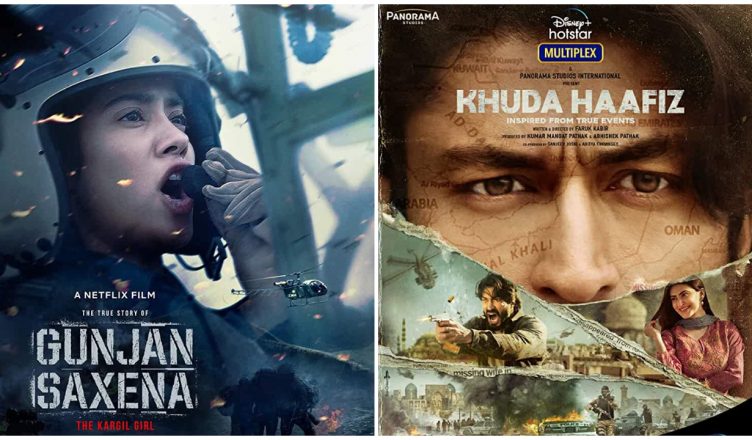 WILL GUNJAN SAXENA AND KHUDA HAAFIZ MANAGE TO IMPRESS AUDIENCES?

2 weeks back, we saw an unprecedented clash of as many 5 films releasing online in around 48 hours. This week too sees a clash between, thankfully, just two films. And these films are releasing 55 hours apart. Both the films however seem promising and can work if made well.

GUNJAN SAXENA – THE KARGIL GIRL (Netflix): It is directed by first timer Sharan Sharma and produced by Karan Johar’s Dharma Productions. It stars Janhvi Kapoor in the leading role of Gunjan Saxena, India’s first woman combat aviator who served India well during the 1999 Kargil War. The trailer is excellent and the film looks like a nice entertaining family film. The war scenes, from the trailer, seem spectacular. It also gives an insight about the challenges faced by Gunjan as she was the only woman in her team. The film was to release on March 13, 2020 after which it was postponed to April 24. With the Coronavirus-induced lockdown getting extended considerably, Karan Johar decided to sell this film to Netflix. This was also done as reportedly, the Dharma team was feeling the pinch and needed cash flow to pay off the salaries of staff and bear other costs. Hence, when they got a good offer from Netflix, they decided to sell the film to the online giant. The revenue they have received covers their entire cost and also ensures profitability. Going by the reviews which are already out, Gunjan Saxena – The Kargil Girl seems to be a winner with many feeling that here’s a film that should have waited and released in cinemas as it had the potential to be a box office success.

KHUDA HAAFIZ (Disney+ Hotstar): It stars Vidyut Jammwal, Shivaleeka Oberoi, Annu Kapoor, Shiv Panditt and Aahana Kumra. It is inspired by true events and focuses on a young man who rescues his kidnapped wife from flesh traders in a Middle-Eastern country. The film looks like an intense action thriller and has been shot on a grand scale in Uzbekistan. Since Vidyut plays a common man here, he won’t be doing too many of his stunts, for which he is known for. Nevertheless, the film has it’s share of action and shall make for an exciting watch. It is directed by Faruk Kabir, whose first and last directed film was Allah Ke Banday, which also starred him as an actor.