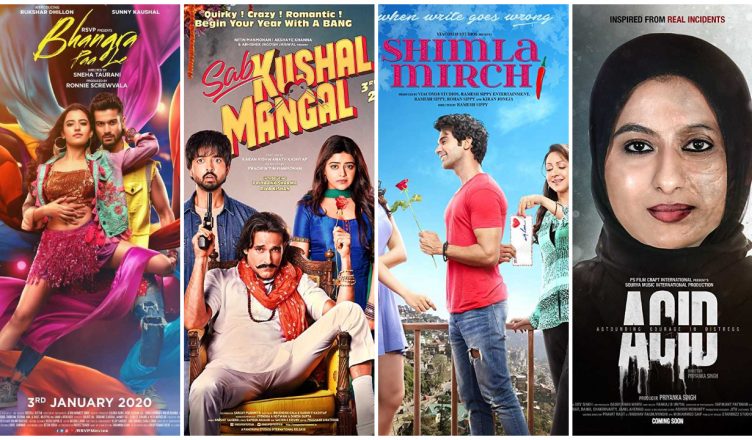 2020 TO START ON A POOR NOTE WITH MULTIPLE, SMALL RELEASES!

A new decade has commenced from today and the Bollywood industry has been looking forward to it big time. Some very exciting films, big and small, will be releasing this year and entertaining audiences big time. However, the first week of January will be tepid, considering the flow of releases. The hype is so bad that not a single film will be able to earn more than Rs. 1 crore on day 1. My analysis:

BHANGRA PAA LE: It marks the directorial debut of Ramesh Taurani’s daughter Sneha and produced by Ronnie Screwvala. Starring Sunny Kaushal and Rukshar Dhillon, it’s a contemporary dance film with a touch of the 40s as well. The trailer is fine and the film looks fresh. But the hype just couldn’t be built. The makers initially planned to release the film on November 1 and then postponed to November 15. At one point, they contemplated releasing it directly on Netflix due to negligible buzz. But Ramesh Taurani, reportedly, was not ready to accept her daughter’s film going straight to digital. Hence, he made the theatrical release happen. The opening will be very bad, around Rs. 30-35 lakhs, and might go to Rs. 50 lakhs if multiplex audiences come out, especially up North.

SAB KUSHAL MANGAL: It’s the first film ever presented by Akshaye Khanna. The veteran actor also stars in this film which marks the debut of Padmini Kolhapure’s son Priyaank Sharma and Ravi Kishan’s daughter Riva. The poster is quirky but the trailer killed whatever little excitement was there for the film. The plot seems routine and the humour is not strong. Songs have not been noticed at all. All these reasons will ensure the film’s opening is not more than Rs. 25-30 lakhs. There’ll be competition between Sab Kushal Mangal and Bhangra Paa Le as to which film will open the best out of them.

SHIMLA MIRCHI: It marks the return of Sholay director Ramesh Sippy. The star cast is interesting – Hema Malini, Rajkummar Rao and Rakul Preet Singh. A film like this ideally can open decently. But Shimla Mirchi won’t as it’s a long, delayed film and it was completed in 2014 or 2015. Trade and industry were left shocked when Viacom18 Motion Pictures dropped its trailer last week on December 26 and also announced that it’ll release on January 3. Prior to this, there was no information at all that this film is releasing day after tomorrow. Rajkummar is holidaying and it’s clear that he won’t be available to promote. Hema Malini and Rakul Preet too haven’t shown any interest in marketing the flick. There are reports that Shimla Mirchi will directly release on OTT platform. However, that’s not true. The film will release in single screens and standalone multiplexes for a week or two, after which it’ll be streamed online. The chain of multiplexes accept a Hindi film only if it comes online 8 weeks after release. Since Shimla Mirchi didn’t adhere to this rule, it seems that no major multiplex chain would allow it’s release in their respective properties. This in turn will significantly affect it’s opening. Day 1 earnings will be less than Rs. 20 lakhs, looking at the screen count as of now.

ACID – ASTOUNDING COURAGE IN DISTRESS: It is a story of an acid attack survivor and is releasing this week to avoid major comparisons with Deepika Padukone-starrer Chhapaak, which releases next Friday, and also has a similar plot. It features Priyanka Singh as actor, director and also producer. The trailer is over the top and it looks like a 90s flick. As a result, it’ll have a disastrous run in theatres.