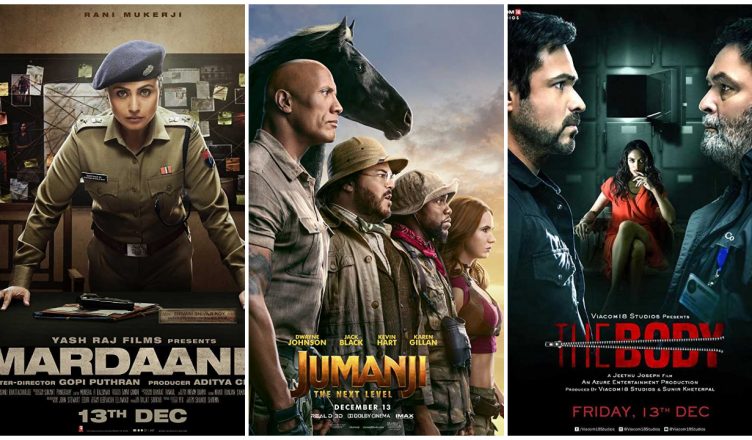 2 OUT OF 3 MAJOR RELEASES TO SCORE TOMORROW!

The last third weekend of the year is here. And all these three Fridays are going to be highly exciting. Next week will see the release of the big-budget Christmas entertainer, Dabangg 3. Usually, a week before that is empty or taken up by small, unimportant films. But this time, there’s an exception. 3 important films are releasing, two Hindi and one English. Out of these, the English flick and the Hindi movie are expected to work well at the box office.

MARDAANI 2: It is the second part of this franchise and also deals with a burning topic. Mardaani dealt with human trafficking and Mardaani 2 focuses on crimes done by juveniles. The trailer is highly exciting and the film promises to be a great thriller. Rani Mukerji once again reprises the role of Shivani Shivaji Roy, a tough cop, and she suits the part to the T. The beauty of the first part was the villain and even here, the antagonist is young and menacing. Interestingly, the makers haven’t shown his face properly in the trailer. In fact, the whole promotional strategy has been different. There are no songs, not even promotional track that was there in part 1. Coincidentally, a ghastly rape and disfiguring of a woman took place in Hyderabad just few days back. But Mardaani 2 makers thankfully didn’t cash in on this episode. However, the film couldn’t have come at a better time as the case is fresh in everyone’s minds.

Mardaani, 5 years ago, had opened at Rs. 3.44 crore. Mardaani 2 can easily open at around Rs. 4-4.50 crore or even higher. Part 1 went on to collect Rs. 35.83 crore in its lifetime and benefited with tax free status in few states. This was despite the ‘A’ certification. Mardaani 2 thankfully has got U/A rating. But it’ll lose out on screens in Week 2 thanks to Dabangg 3 and further in Week 3 due to Good Newwz. But if the response is positive, it can have a great first week and can even cross Rs. 50 crore in its lifetime.

JUMANJI: THE NEXT LEVEL: It is the sequel of Jumanji: Welcome To The Jungle, which released in 2017 and was one of the biggest Hollywood hits of that year, earning Rs. 52 crore approx. The storyline is interesting as it’s about four teenagers who are transported into the video game world of Jumanji and play as their chosen characters. Dwayne Johnson, Kevin Hart, Jack Black, Karen Gillan and Priyanka Chopra’s hubby Nick Jonas star in the film. The film is an action comedy adventure and fit for big screen for families and youth alike. The first part opened at around Rs. 4 crore and this one can have an opening of Rs. 6-7 crore or even more. It also has paid previews from today evening and that can also help in getting a crore or two more. It can have a weekend of Rs. 25 crore if all goes well and can cross the lifetime of part 1 in its second weekend. If response is bad, the film can suffer and will have slim chances to score in the subsequent weeks.

THE BODY: It is a remake of a Spanish film of the same name. It stars Emraan Hashmi, Rishi Kapoor and Sobhita Dhulipalia and marks the Bollywood debut of Vedhika Kumar. It is directed by Jeethu Joseph, who directed the original Drishyam. Incidentally, the original film was directed by Oriol Paulo, who also made The Invisible Guest. This is the same film that was remade as Badla earlier this year and was one of the biggest hits. Badla opened at Rs. 5 crore and thanks to content, right release period and star cast, it collected Rs. 87.56 crore. The Body sadly will open at around Rs. 1-1.25 crore or maybe around Rs. 1.50 crore, which was also the opening day figure of Emraan’s earlier film Why Cheat India. This is because there’s no buzz or hype for The Body at all. Songs haven’t worked. The recreated version of Jhalak Dikhhla Ja, a hit song of Emraan’s 2006 film Aksar, was panned and it seemed like a last minute effort by the makers to get some hype for the film. But it didn’t work. Moreover, the release period is just wrong as audiences would prefer going for Mardaani 2 or Jumanji: The Next Level. Ideally, The Body should have released two weeks back with Commando 3.