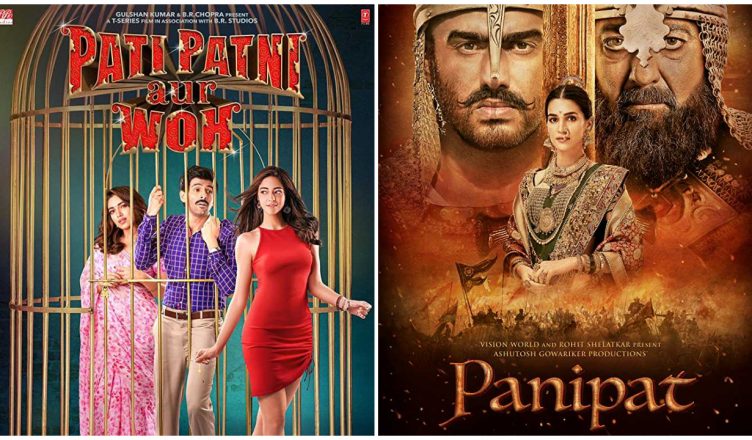 The last week saw the release of a medium budget film (Commando 3) and the not-so-big-film-for-Indian-market (Hotel Mumbai). It was a week which could have afforded another medium release, especially considering that tomorrow and the week after will see too many films jostling for screen space. Nevertheless, it proved advantageous for Commando 3. The first 2 parts were underperformers but the third part has emerged as the biggest film of the franchise. It’ll cross the Rs. 35-crore-mark but reaching Rs. 40 crore mark will be difficult due to the release of two important films tomorrow. My analysis:

PANIPAT: It is a period action film starring Arjun Kapoor, Sanjay Dutt and Kriti Sanon along with Mohnish Bahl, Padmini Kolhapure and Zeenat Aman. It is directed by maverick filmmaker Ashutosh Gowariker and is mounted on a big scale. The film is based on the third battle of Panipat, which is an important chapter of India’s history. A film on this topic can make for a great watch if made well. The trailer is interesting and the film looks like something that should be enjoyed on the big screen. Usually, such films get criticized for lack of authenticity. But Panipat has been an exception.

The challenges faced by the film are aplenty. The film lacks excitement, primarily because of Arjun Kapoor’s casting. Arjun has been a popular actor but off late, his popularity has suffered a beating. Netizens claim he is a misfit in this film. In fact, the negativity towards the actor is to another level. Ashutosh Gowariker’s last three films have been flops. Audiences don’t have the same kind of trust in him the way they do in Sanjay Leela Bhansali, also known for his period films. Music hasn’t worked at all. Also, audiences have seen many such films in recent times like Manikarnika – The Queen Of Jhansi, Kesari, Sye Raa Narasimha Reddy etc. Also, the other release Pati Patni Aur Woh is a big competition. Due to all these reasons, it seems next to impossible for Panipat to break even, due to its high costs. The opening will be around Rs. 4-5 crore, and might go to Rs. 5.50 crore. That’ll be a low number for such an expensive film. It really needs to have a good word of mouth to have some sort of respectable collections.

PATI PATNI AUR WOH: It is a remake of the 1978 film of the same name and stars Kartik Aaryan, Bhumi Pednekar and Ananya Panday. The film looks like a colourful, entertaining flick and appeals to the youth and families alike. It is directed by Mudassar Aziz, whose Happy Bhag Jayegi was loved for its execution, writing and quirky humour. Pati Patni Aur Woh also seems to be in the same zone. Songs have worked to an extent. The excitement hence is there though it’s not skyhigh. Also, a dialogue on marital rape, shown in the trailer, was heavily slammed. Reportedly, the makers have removed it from the film. The opening can be in the range of Rs. 7-8 crore which is great for this film. A Rs. 28-30 crore weekend will be a fantastic result and the film can easily cross over the Rs. 50 crore mark, if response is positive. It’s costs are not huge and this will also prove beneficial.