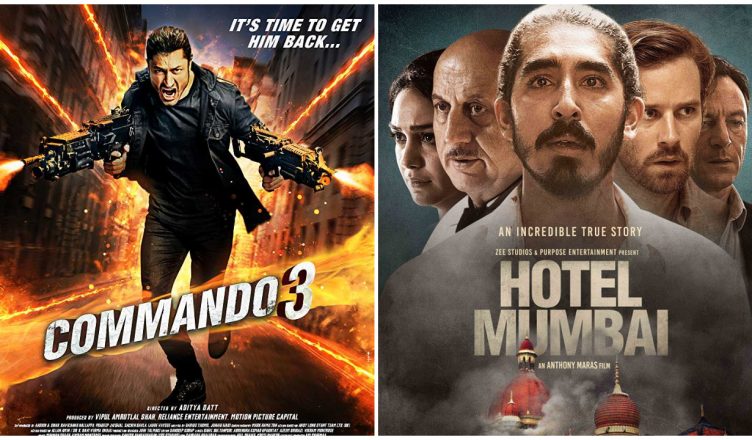 WILL COMMANDO 3 MANAGE TO SUCCEED, UNLIKE ITS PREDECESSORS?

Usually, sequels are made of successful films but in Bollywood, that doesn’t always happen. There have been many films that aren’t hits or even that popular. And yet, their producers come up with their second part. Commando is one such franchise. The part 1, released in 2013 was an average fare and was remembered only for Vidyut Jammwal’s stunts. That didn’t stop producer Vipul Shah from presenting Commando 2, which released in 2017. This film’s lifetime collection was Rs. 21.61 crore, which was slightly better than the first part, which earned Rs. 19.89 crore. But since Commando 2’s costs were much higher, it was given a Flop verdict.

And now Commando 3 is all set to release tomorrow. It features Vidyut Jammwal of course and also Adah Sharma, who was also in Commando 2. Her role of a badass and sexy Hyderabadi cop was loved, especially by television audience. Hence, the decision was made to bring her back in the third part. Angira Dhar is the second female lead while Gulshan Devaiah plays the villain. It is directed by Aditya Datt, who has made Aashiq Banaya Aapne, Table No 1 etc in the past. The trailer is decent and seems like a good entertainer. Action obviously should be the highpoint. And it’s lucky that it’s getting a solo release of sorts. Next week sees the release of two important film, Panipat and Pati Patni Aur Woh. It was expected that either of the two films would release tomorrow. But that didn’t happen and as a result, Commando 3 enjoys a clear one-week window. Also, last week’s Pagalpanti and the holdover releases Marjaavaan and Bala have exhausted their audiences. Incidentally, all Commando films have released at a great time. Commando’s first part clashed with Nautanki Saala, which wasn’t a huge competition. Commando 2 meanwhile arrived solo with no competition from holdover releases too. And now Commando 3 follows suit!

Yet, Commando 3 will have a very tough time. As aforementioned, the series is not that popular at all. To add to it, the trailer is fine but not very exciting that will pull audiences to cinemas. Even songs have worked at all. Commando’s opening day numbers were Rs. 3.43 crore while that of its sequel was Rs. 4.41 crore. Commando 3 will definitely open less than Commando 2 and there are chances that it’s collections might be less than part 1 as well. If the mass and patriotism elements come out well in the film, then it has the chance to grow from the second day, especially in mass centres. And then with a good hold in the weekdays, it can emerge as the biggest film of the franchise. But if reports are bad, then it’ll crash heavily.

The other significant release tomorrow is Hotel Mumbai, based on 26/11 Mumbai terror attacks. It’s an Australian-American-Indian co-production and stars Dev Patel, Anupam Kher, Armie Hammer, Nazanin Boniadi, Tilda Cobham-Hervey and Jason Isaacs. The film specifically focuses on what happened that fateful night in the Taj Mahal Palace hotel. The film looks niche and even star cast is not enticing for Indian audiences. On top of that, the film has released in most countries in March 2019. It’s already out on Amazon Prime in most countries and also on torrent websites. Many in India have already seen it. Interestingly, it was to release on March 29 but was pulled out at the last minute. It was speculated that it happened due to the Pulwama attacks but it came to light that there was some legal tussle going on between the makers.

Due to all these reasons, the opening day collections of Hotel Mumbai would be very less and might not even touch the Rs. 1 crore mark. It has chances to work the best in and around Mumbai.