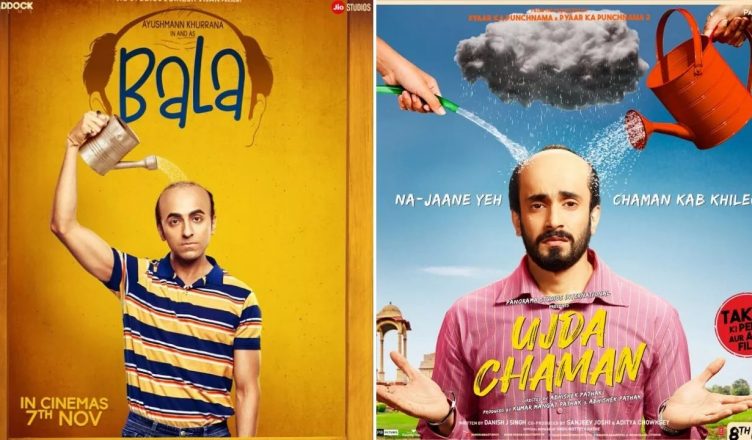 Last Friday was crowded thanks to the release of one biggie – Housefull 4 and two small films – Made In China and Saand Ki Aankh. This happened as it was the beneficial Diwali week. Usually, no significant film tries its luck in the week following Diwali and this year, there were three releases. Yet, tomorrow, a moderately priced film, Ujda Chaman, will try its luck.

Ujda Chaman stars Sonu Ke Titu Ki Sweety actor Sunny Singh alongwith Maanvi Gagroo. It is directed by Abhishek Pathak, who along with his father Kumar Mangat produced films like Pyaar Ka Punchnama and also Sonu Ke Titu Ki Sweety. Ujda Chaman is Abhishek’s first directorial venture and is a remake of a Kannada film Ondu Motteya Kathe. The film deals with the very relatable topic of premature balding and how a man’s marriage prospects gets affected as a result. The film was approved and shot less than 5-6 months ago. The shoot was done in a quick start-to-finish schedule in Delhi and Ghaziabad. There was no indication of the film being made and even trade and industry found out about Ujda Chaman when the makers released the poster and subsequently, the trailer. The promo however has been appreciated a lot, which is great, considering the lack of popular names in the film

Ujda Chaman faces many challenges. Songs haven’t worked at all. It’s releasing at a time when Housefull 4 and Saand Ki Aankh are still going a bit strong. But more than that, the film faces a tough fight from Ayushmann Khurrana starrer Bala, which releases next week and is based on the similar idea. Bala was officially announced in December 2018 and shooting began in March or April 2019. Ujda Chaman got locked and shot later on. Hence, one can argue that Ujda Chaman makers copied Bala’s plot. But the truth is more far more complicated. As mentioned above, Ujda Chaman is an official remake of Ondu Motteya Kathe. Producer Kumar Mangat claims that their film is a legitimate adaption while Bala is a rip off. Kumar has even moved Supreme Court and a hearing on the same will be held on November 4.

The Ujda Chaman vs Bala row didn’t end here. Initially, Bala was to release on November 15 while Ujda Chaman was to hit screens on November 8. But 3 weeks ago, the makers of Bala advanced their film by a week, on Thursday November 7! Hence, two films with the same basic plot were to hit screens in the same week! To avoid this clash, Ujda Chaman makers hence decided to come tomorrow, that is, November 1. There were speculations that even Bala will release tomorrow but thankfully, that’s not happening.

Bala looks far more exciting and has Ayushmann Khurrana in the lead, who enjoys a lot of popularity. Hence, viewers might skip Ujda Chaman and prefer to watch Bala. The opening of Ujda Chaman hence would be around Rs. 1-1.50 crore with an outside chance of it earning Rs. 2 crore. If word of mouth is positive, it can grow significantly in multiplexes. Or else, it’ll have a very tough time.

WOULD YOU LIKE TO SEE UJDA CHAMAN AND WHY? DO LET ME KNOW!