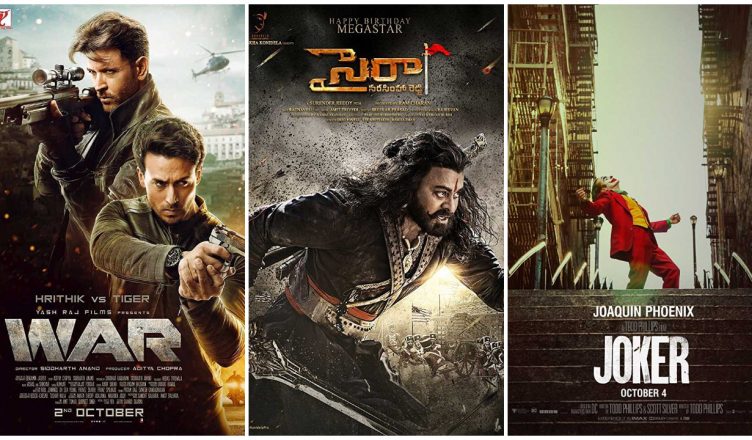 WILL WAR EMERGE AS THE BIGGEST HINDI OPENER OF ALL TIME?

The stage is set. One of the biggest films of our times, War, is all set to release tomorrow and the excitement is palpable. At a time when two-hero films are rare, this flick stars Hrithik Roshan along with the emerging superstar Tiger Shroff, and that too in action avatar. It is directed by Siddharth Anand and backed by Yash Raj Films. Siddharth’s last film, Bang Bang, was criticized but one can’t deny that he is well-versed with handling action scenes with élan. And in case of War, the various fights and chase scenes give a never-before-seen experience, at least when it comes to Bollywood. The scenes are at par with Hollywood standards and adds a lot to the excitement.

War also stars Vaani Kapoor who looks sizzling but her role seems limited. Two songs have come out till now, Ghungroo and Jai Jai Shivshankar, and both have been alright. But they have helped in increasing the buzz. Jai Jai Shivshankar features Tiger and Hrithik together and can be a film’s highpoint, more so because they are against each other for most part of the film.

War releases tomorrow, October 2, a national holiday on account of Gandhi Jayanti. A couple of more biggies will release this year during festivals but they won’t open on the day of a festival. Housefull 4, for instance, is a Diwali release but hits screens 2 days before the actual festival. Hence, Housefull 4 and the Christmas release Dabangg 3 won’t have a record opening. War however has the advantage of releasing on a beneficial national holiday. The opening, as a result, will be of record levels. The biggest Hindi opener of the year is Bharat at Rs. 41.62 crore and War is sure to cross this figure. It is expected to have an opening of around Rs. 45 crore. A section of trade and industry however are hopeful that it’ll break the Thugs Of Hindostan record of Rs. 48.27 crore and emerge as the biggest Hindi opener of all time. That is very much possible if word of mouth is positive. If all goes well, War will have a fantastic five-day weekend and by Sunday, it can earn around Rs. 150 crore. And then, sky is the limit for this actioner.

War however has small competition from two films. One is the Telugu period action film, Sye Raa Narasimha Reddy. Starring Chiranjeevi, Sudeep, Vijay Sethupathi, Amitabh Bachchan, Jagapathi Babu, Tamannaah Bhatia and Nayanthara, the film’s dubbed Hindi version is backed by Farhan Akhtar and Ritesh Sidhwani. The trailers are excellent and it can make for a worth watching, patriotic film. In original Telugu version, it is expected to have an earth-shattering start. But the Hindi version has got very few shows and this will affect the opening days earnings. If War turns out to be bad, Sye Raa Narasimha Reddy would get the benefit. As of now, the opening of the Hindi dubbed version will be around Rs. 1.50-2 crore. A similar film KGF, also released by Farhan Akhtar and Ritesh Sidhwani, had opened at Rs. 2 crore. It had clashed with Zero but had a slightly better release.

Lastly, the Hollywood film Joker also releases tomorrow. It is based on the iconic villain of DC and has Joaquin Phoenix playing the lead. The reviews from Overseas are outstanding and the most positive for a film in a long time. It’s a dark film and releasing only in original English version which is why it has got only around 400-500 screens. But the advance is surprisingly excellent and it is all set to have an opening of around Rs. 3-4 crore or even higher! If all goes well, Joker will also create a record, of being the highest non-dubbed Hollywood film in India!

In other words, all three films of the week have the potential to create and break records. Have you booked your tickets yet?