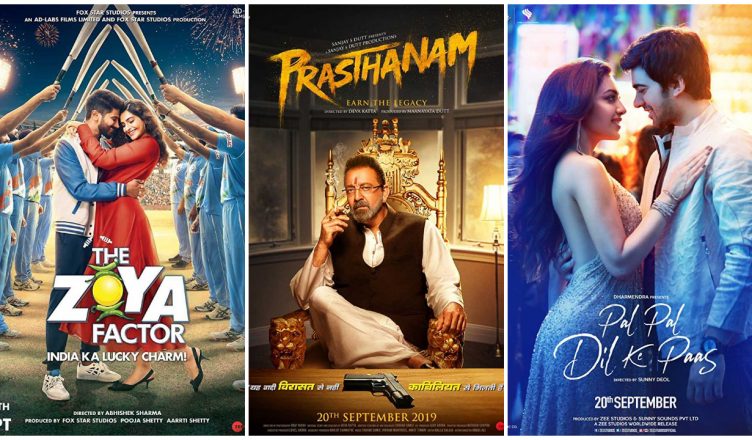 THREE NOT-SO-EXCITING FILMS TO TRY THEIR LUCK AT THE BOX OFFICE!

The release of one of the biggest films of Bollywood, War, is less than two weeks away. There’ll be no major release next Friday and taking advantage of this 12-day gap are three films. These release tomorrow and the buzz for each movie is very low. In fact, it’s even difficult to say which one will open better. My analysis:

THE ZOYA FACTOR: It stars Sonam Kapoor, Dulquer Salmaan, Sanjay Kapoor and Angad Bedi and is based on Anuja Chauhan’s bestseller by the same name. The premise is interesting – a girl, born on June 25, 1983, that is, on the day India won the World Cup, emerges as a lucky charm for the Indian cricket team, leading to madness and fun. The film is directed by Abhishek Sharma, who impressed last year with Parmanu and earlier with Tere Bin Laden. Sadly, the trailer is not that interesting and funny. The novel was set in 2008 and hence, Zoya is around 24 or 25 years of age. If the movie is present-day era, Zoya’s age would be around 35 or 36 and that would make it unconvincing as Sonam doesn’t look that old. Songs too have failed to make a mark. 5 years ago, a similar Sonam Kapoor starrer with more hype, Khoobsurat, opened at Rs. 2.34 crore. The Zoya Factor however will open in the Rs. 1.50 or 2 crore range.

PRASSTHANAM: This flick bring together 90s stalwarts together like Sanjay Dutt, Jackie Shroff, Manisha Koirala and Chunky Panday. The other actors in this political action film are Ali Fazal, Amyra Dastur and Satyajeet Dubey. It is the remake of the classic 2010 Telugu flick of the same name and also directed by the original film’s director, Deva Katta. The trailer has promise while songs have failed to even get noticed. Prassthanam is produced by Sanjay Dutt and his team is wrongly spreading the information that this is his first production. However, Sanjay had also produced Rascals and another film, Hasmukh Pighal Gaya, is also ready but never released. The film misses a popular face that can pull audiences to cinemas. Sanjay is not credible especially after delivering films like Bhoomi and Saheb Biwi Aur Gangster 3. Due to the massy feel, the opening will be around Rs. 1.75-2 crore and can even go higher. If it’s as well-made as the original, then it has a big chance of growing with each passing day.

PAL PAL DIL KE PAAS: It marks the debut of Sunny Deol’s elder son Karan and is directed by Sunny himself. Sahher Bambba, also a newcomer, is the female lead. The teaser seemed interesting as the film is shot in some of the beautiful and remote locations of Himachal Pradesh. But the trailer made it clear the film rests on a very weak and outdated storyline. The songs have worked a bit. Also, Sunny is promoting this film all over due to which this film has got noticed a lot. But it’s unlikely how many will be excited to venture out to see it. The opening will be poor, around Rs. 1.25 or 1.50 crore. It can be even less, as it happened recently with Notebook. This film was similarly backed by a veteran star (Salman Khan) and had two newcomers but had a shocking opening of Rs. 61 lakhs. Hence, a less-than-a-crore-opening can’t be ruled out too!