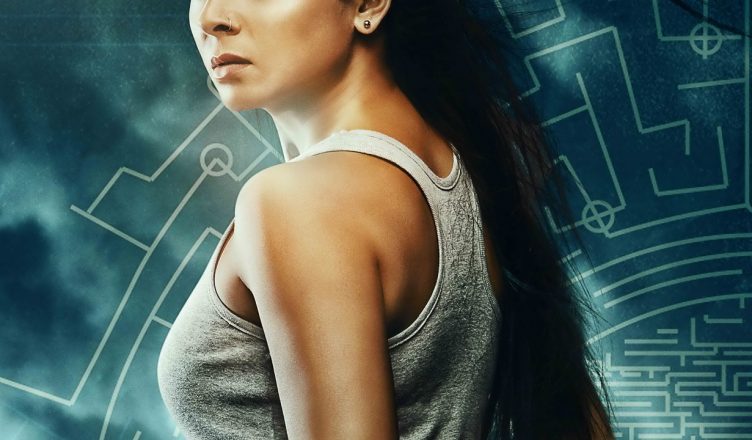 After the Swapnil Joshi-starrer Mogra Phulaalaa, Arjun Singgh Baran & Kartik Nishandar of GSEAMS (Global Sports Entertainment And Media Solutions Private Limited) are now back with another interesting Marthi flick. Unlike Mogra Phulaalaa, a family drama, their next Vicky Velingkar is a mystery and stars the much loved Sonalee Kulkarni in leading roles. It is directed by Saurabh Varma, who made Hindi films like Maniesh Paul’s debut flick Mickey Virus, the action flick 7 Hours To Go and the unreleased comic caper Solid Patels.

The makers released the first look teaser poster of Vicky Velingkar and it’s sure to catch eyeballs. It features Sonalee Kulkarni wearing a rugged, grey tank top and jeans and giving a no-nonsense pose. Interestingly, her face is not fully seen. The maze in the backdrop further adds to the mystery element of the film.

Saurabh Varma shares some interesting details about the film and states, “Vicky Velingkar is a comic book artist and a clock seller who entangles in an unexpected life mystery. The film is about a female underdog who rises against all odds.”

Sonalee Kulkarni, over the years, has carved a niche for herself with her talent and beauty, despite her name being similar to that of Sonali Kulkarni! She has given some memorable performances like films like Natarang, Ajintha, Zapatlela 2, Classmates, Mitwaa and Hampi. Earlier this year, she was loved for her bubbly role in Ti And Ti. In Bollywood, she did a special comic appearance in Rohit Shetty’s Singham Returns as Menka.

Vicky Velingkar is a co-production of GSEAMS, Loki Studio and Dancing Shiva. GSEAMS, besides Mogra Phulaalaa have also produced Fugay, Tula Kalnnaar Nahi and Ranangan and also presented Bhikari. Dancing Shiva is run by Anuya Chauhan Kudecha and Ritesh Kudecha and they recently produced the sleeper hit of 2019, the Hindi flick The Tashkent Files. Their other projects include the web series All About 377, currently streaming on Sony LIV, and Woh Waali Picture, releasing soon on Zee5. And finally, Loki Studio is run by Sachin Maruti Lokhande and Atul Janardan Tarkar. It offers variety of allied services like social media marketing, brand association, branded content, film production, visual promotions etc