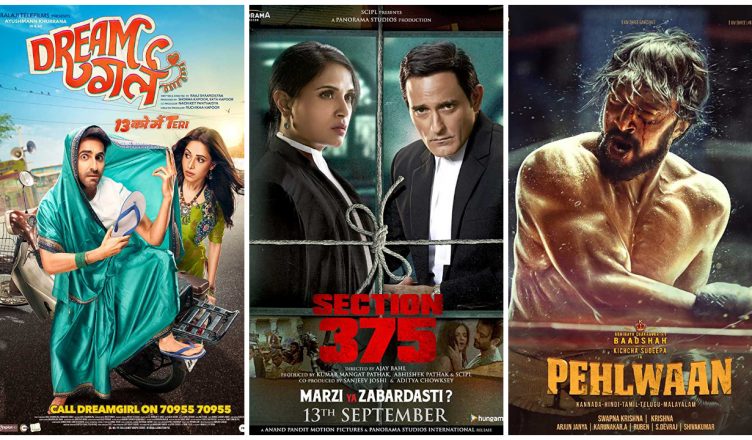 WILL DREAM GIRL TURN OUT TO BE AYUSHMANN KHURRANA’S 5TH CONSECUTIVE HIT?

Over the years, Ayushmann Khurrana has become a brand on its own. He had a bit of a rough time till 2017. But in the same year, he gave two films – Bareilly Ki Barfi and Shubh Mangal Saavdhan – that brought him back in the race. Last year was even better as Andhadhun and Badhaai Ho both became extremely successful. Both films earned numbers and were box office successes, with Ayushmann even getting a National Award for Andhadhun. Earlier this year, he came up with Article 15, a film that was too serious and yet generated excitement chiefly due to his presence. It was a well-made film too and both factors helped Article 15 earn Rs. 65.17 crores at the box office.

And now Ayushmann Khurrana will be seen in Dream Girl, which is all set to release tomorrow. The excitement for the film is tremendous due to its trailer and content. The actor plays the role of a person who fools gullible men (and even a woman) by talking in a female voice. Madness ensues as all these people fall for ‘Pooja’, the pseudonym adopted by Ayushmann’s character. The other actors in the film are Nushrat Bharucha, Annu Kapoor, Manjot Singh, Vijay Raaz and Abhishek Banerjee. Songs have also worked very well, especially Radhe Radhe and Dil Ka Telephone. A promotional track, Dhagala Lagali, was also released featuring Ayushmann Khurrana, Nushrat Bharucha and Riteish Deshmukh. It looks out of place since it’s a recreation of a Marathi song while the film is based in Mathura.

Nevertheless, the excitement is intact. Dream Girl is expected to take an opening of around Rs. 9-10 crore. If word of mouth is positive, a weekend of Rs. 38-40 crore can’t be ruled out. Even if response is not so great, the buzz is high enough and would still do decent business.

Dream Girl is not the only release. There’s also Section 375, featuring Akshaye Khanna, Richa Chadha, Rahul Bhat and Meera Chopra. It was to be earlier directed by Manish Gupta, who helmed The Stoneman Murders and Rahasya. But he had issues with producer Kumar Mangat Pathak which led to his ouster. BA Pass director Ajay Bahl then stepped in. The trailer of the film is powerful. With #MeToo still being fresh in people’s minds, it seems like a very relevant film. The excitement for the film is hardly there. And it’s a song-less film. Hence, the makers didn’t have the advantage of promoting the film through music. The opening will be less, around Rs. 1-1.25 crore. But the subject is such that if word of mouth is there, day 2 collections can be double of day 1.

The final release of the week is Pehlwaan. It is the dubbed version of the Kannada flick Pailwaan, starring Sudeep and Suniel Shetty. The Kannada version will take a smashing opening. But the Hindi version will open very poorly. There’s no awareness, forget excitement. It can open to around Rs. 30-40 lakhs.