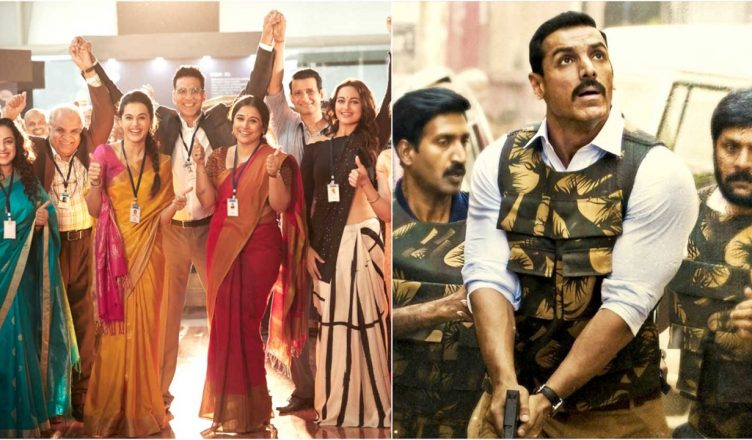 INDEPENDENCE DAY WEEKEND TURNS OUT TO BE A WIN-WIN FOR ALL!

Last year on Independence Day, two interesting films with huge potential released. Gold, a period sports biopic, starring Akshay Kumar seemed like an ideal blockbuster because of Akshay’s presence and patriotic element. It even had a rocking opening at Rs. 23.63 crore. But reports were mixed and as a result, the film fell down quickly. It barely managed to reach the Rs. 100 crore club and its lifetime was Rs. 102.50 crore. The other film, Satyameva Jayate, starring John Abraham and Manoj Bajpayee, seemed like a smaller film and a movie that would have opening which would be half of that of Gold. The massy touch in the trailer and the super hit song ‘Dilbar’ however worked wonders and the film opened at a mind-boggling Rs. 19.65 crore. From here, a well-made film would have cruised easily into the Rs. 100 crore club. Sadly, the collections came down soon enough and it’s lifetime earnings were Rs. 79.61 crore. Satyameva Jayate was still a super-hit but a lot was expected after the blockbuster opening.

This Independence Day thankfully turned out to be much better. Again, an Akshay Kumar starrer and a John Abraham starrer clashed but both the movies are doing very well. Mission Mangal stars Akshay Kumar, Vidya Balan, Taapsee Pannu, Sonakshi Sinha, Kirti Kulhari, Nithya Menen and Sharman Joshi and is based on India’s Mars mission. The buzz created by the film was tremendous and moreover, ticket prices were hiked. As a result, it opened at a huge Rs. 28.50 crore on Thursday August 15. In the weekend, it sustained very well. As of Tuesday, it has managed to earn Rs. 112.50 crore and first week collections are expected to be around Rs. 125 crore. In its lifetime, it should net in the Rs. 165-175 crore range. If we don’t count 2.0, then Mission Mangal would be Akshay Kumar’s highest grosser.

The other release, Batla House, was also based on a true story, of a 2008 controversial encounter by the Delhi Police. It stars John Abraham and Mrunal Thakur and is directed by Nikkhil Advani. Again the trailer had raised hopes while the item song ‘O Saki Saki’ had impressed the masses. Still, the buzz wasn’t of Satyameva Jayate level. This was reflected in its opening of Rs. 14.50 crore. The weekend was fine but in the weekdays, it’s holding very well. The first week collections would be around Rs. 59-60 crore. It is expected to hold well in the second week as well as there are no release. Hence, if all goes well, it’ll go past the Satyameva Jayate lifetime, despite not opening the same way as 2018 flick. The difference here is the good word of mouth.

The audiences have got their money’s worth. The exhibitors too are happy with the footfalls recorded during the week and are hopeful that the coming weekend will also draw audience in hordes for these holdover films. Both films have emerged as profitable ventures for the producers as they were made on reasonable budgets. As a result, it’s been a win-win situation for everyone!