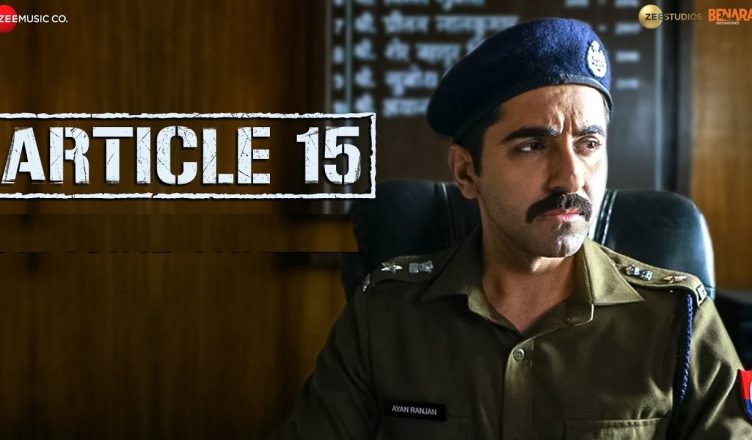 WILL ARTICLE 15 MANAGE TO BE A COMMERCIAL SUCCESS?

The theatrical trailer today can make or break a film’s prospects at the box office. Several films that didn’t make noise at the box office suddenly became ‘hot’ once their well-cut trailer drops. And there have been times when a film has had a bad trailer and this affects it’s potential despite being well-made. Such films at times get audiences from Day 2 but there are also films that never find an audience in theatres and score only later on TV or OTT platforms.

The trailer of Article 15 thankfully is very impressive and has generated tremendous buzz among its target audience. It is based on several true incidents like Badaun gang rape case and Una flogging incident. It is evident that writer-director Anubhav Sinha is making an important comment in the film on the ills of the caste system in our country. Bollywood rarely has touched upon this aspect so fearlessly. This is also one of the reasons why Article 15 trailer made such a huge impact. Moreover, it has Ayushmann Khurrana in the lead. In the last two years, he gave 4 back-to-back hits. Last year, he also delivered Badhaai Ho, that collected around Rs. 136 crore at the box office. As a result, his presence has given the film that extra boost.

Article 15 however seems like a niche film. The theme of caste murders is not a mainstream one and can put off a section of viewers. As a result, the hype is there but not amongst all kinds of moviegoers. The opening can be around Rs. 4-5 crore with an outside chance of earning Rs. 6 crore as well. If word of mouth is positive, then Day 2 can be quite high. Collections will be affected on Day 3 due to India vs England World Cup match. But a Rs. 20 crore weekend can be ideal and it can sustain well in the weekdays, as it often happens with such films, then nothing like it. If response isn’t favourable, then Article 15 will suffer.

Anubhav Sinha last year gave a film in the similar zone, called Mulk. Due to presence of not-so-exciting star cast and serious theme, it opened at just Rs. 1.52 crore but later went on to do a lifetime of Rs. 21.89 crore. Post Mulk, Anubhav Sinha has become a bit known and Article 15 has also been promoted with ‘From The Director Of Mulk’ tagline. Here’s hoping Article 15 works and scores at the box office so that more filmmakers can attempt such stories!

WOULD YOU LIKE TO SEE ARTICLE 15 AND WHY? DO LET ME KNOW!