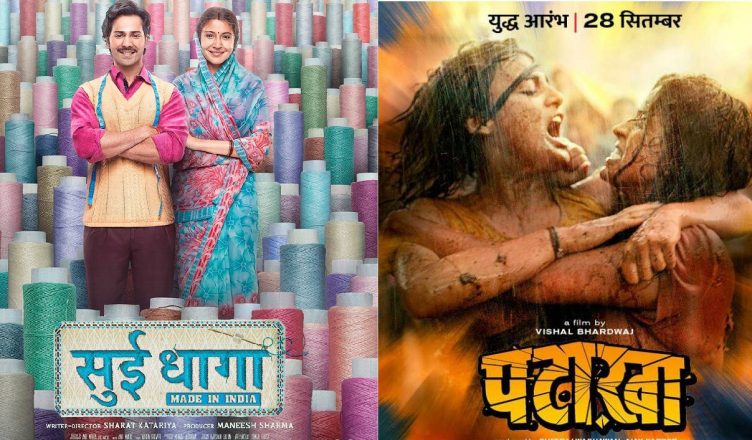 WILL SUI DHAAGA ENSURE THAT SEPTEMBER ENDS ON A GOOD NOTE?

The month of September has been disappointing. The last day of the August saw the release of the much-loved Stree. But the subsequent three weeks of September saw a lot of films releasing and none of them have been hits. Even art films like Manto and Love Sonia got limited critical appreciation and were box office disasters.

Now all eyes are on the last major film of the month, Sui Dhaaga. There’s tremendous excitement for the film despite that it’s not a usual entertainer. Lead actor Varun Dhawan however calls it his ‘most massy film till date’. He is paired opposite Anushka Sharma and this pairing has grabbed eyeballs. What’s also been talked about is the various memes of Anushka that flooded the internet like crazy. Sui Dhaaga is directed by Sharat Katariya and produced by Maneesh Sharma under the Yash Raj Films banner. This is the same team that delivered the surprise 2015 hit, Dum Laga Ke Haisha. Sui Dhaaga trailer has been loved and it looks like a rooted film. It also speaks about self-reliance and is in sync with Mahatma Gandhi’s teaching. This will help since the film is releasing in the Gandhi Jayanti week. Moreover, the film also promoted the Make In India initiative of the government.

The album is melodious but hasn’t worked well. Also, in the last 2 weeks, the film didn’t pick up much in terms of buzz. But with no other film around and thanks to the presence of Varun, the film is bound to bring audiences. The opening would surely be in double digits, in the Rs. 10-11 crore range. If the word of mouth is positive, it can pick up very well since it’s a family audience. It won’t be surprising if Sunday collections touch the Rs. 25 crore mark! Also, since Tuesday October 2 is a holiday, the collections on Monday October 1 evening would be strong. And on October 2, the film can again collect very well. Hence, Sui Dhaaga has high chances of crossing Rs. 100 crore mark in the second weekend itself. The target will be to cross the collections of Dilwale, which stand at Rs. 139.97 crore. This would enable Sui Dhaaga to emerge as Varun Dhawan’s highest grosser. Needless to say, all this will happen only if the film is an entertaining fare and enjoys a good word of mouth.

The other release of the week is Pataakha, directed by Vishal Bhardwaj. It stars Dangal girl Sanya Malhotra and TV actress Radhika Madan along with Vijay Raaz and Sunil Grover. The trailer has found no takers and looks unexciting. The idea of two girls fighting like animals is not something that would excite audiences. Even the songs haven’t got noticed. The desperate makers released one more trailer few days ago and it almost gives away the entire plot of the film. It was a last-minute ploy to generate some hype but has failed. The opening might be less than Rs. 1 crore and the film will struggle to reach the Rs. 10-12 crore mark. Only if the word of mouth is extraordinary will this film work.