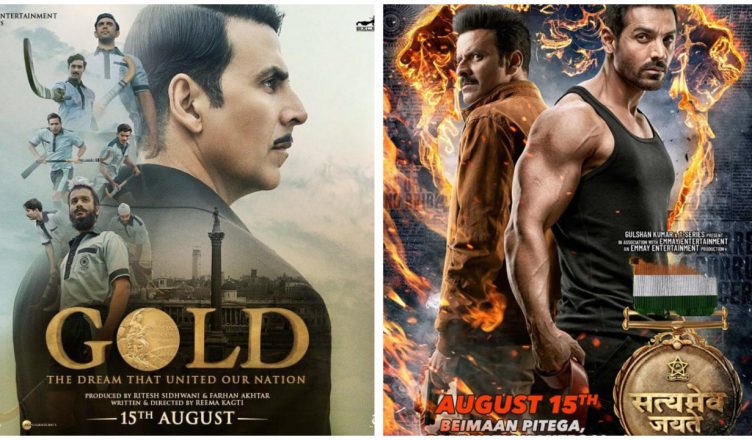 One of the biggest and most interesting clash is all set to take place tomorrow on Independence Day. One biggie and one reasonably budget flick will be releasing and both films have the ability to rake in a lot of moolah at the box office. My analysis:

GOLD: It stars Akshay Kumar in the leading role and throws light on India’s first ever gold medal won in an international sporting event as an independent nation. Akshay plays the manager of the team while the players are essayed by Kunal Kapoor, Amit Sadh, Vineet Kumar Singh, Sunny Kaushal etc. Popular television actress Mouni Roy makes her film debut and she plays Akshay’s wife. The subject itself is quite interesting and ideal for Independence Day, when the patriotic fervour is quite high. The film is directed by Reema Kagti, who has made a mark with films like Talaash and Honeymoon Travels Pvt Ltd. Both these films were quite niche and it remains to be seen if she’s given a mainstream execution to Gold because it’s quite a big budget film and has to reach a wider audience to recover costs. Sadly, the excitement among the masses for this film is limited. But it has got considerable shows everywhere. The opening is expected to be in the Rs. 18-20 crore range since it’s also a national holiday. As a result, it’ll break the day 1 record of Akshay’s 2015 comic caper Singh Is Bliing and emerge as his biggest opener ever (which collected Rs. 16.98 crore). Since it’s a five-day weekend, Gold can cross Rs. 100 crore by Sunday if all goes well. Whether it crosses the Rs. 132.07 crore collections of Toilet – Ek Prem Katha and also turns out to be Akshay’s biggest grosser remains to be seen. Akshay is a great actor and a superstar and it’s high time his film go past the Rs. 150 crore mark!

SATYAMEVA JAYATE: This film is directed by Milap Zaveri and stars John Abraham and Manoj Bajpayee. It is also the debut of Neha Sharma’s sister Aisha. It is a completely massy flick that speaks about corruption, apathy in the system etc. With such a massy execution and relatable issues, Satyameva Jayate has the ability to appeal a wider range of audiences. Music overall hasn’t been big but Dilbar has become a craze. The trailer is interesting but gives a dated, 90s feel. This can be a problem if even the film is made in a similar fashion. Secondly, the film has got an Adults-only rating from the Censor Board. This will curtail its reach to an extent. The opening still can be big, in the Rs. 7-8 crore range. But how much it can earn eventually with the ‘A’ rating remains to be seen. At several ‘B’ and ‘C’ centers, Satyameva Jayate might perform better than Gold in the first few days at least.