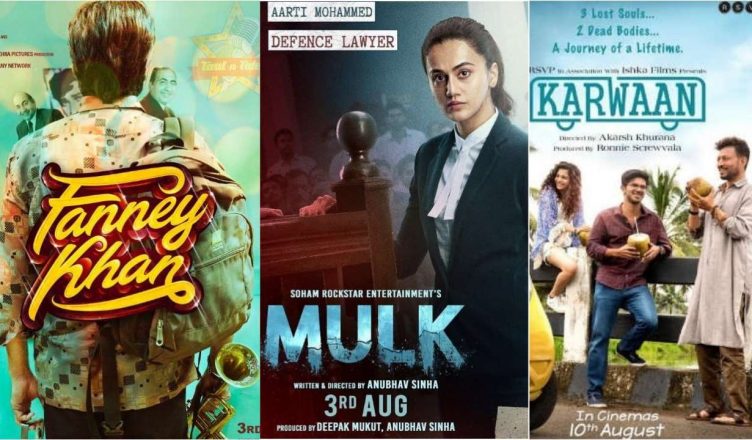 3 MEDIUM-BUDGET WITH LOW BUZZ TO RELEASE THIS FRIDAY!

The months of June and July had very limited big releases and all that is going to change in the next 3 months. August, September and October will see at least one release every Friday with many weeks will see clashes. One significant clash will happen tomorrow when as many as three flicks would release. All of them are reasonably priced but suffer from low buzz. My analysis:

FANNEY KHAN: It is the remake of a Belgian film Everybody’s Famous and marks the directorial debut of Atul Manjrekar. It is jointly produced by Rakeysh Omprakash Mehra and Bhushan Kumar and stars Anil Kapoor, Aishwarya Rai Bachchan, Rajkummar Rao, Divya Dutta and Pihu Sand. The trailer hasn’t created a rage but has been liked nevertheless. The music has been aggressively promoted and only Mohabbat has worked well. A few days ago, a controversy erupted when the makers tweaked the song ‘Mere Achche Din Kab Aayenge’ to ‘Mere Achche Din Ab Aaye Re’ under the pretext that the original version was used to target the ruling BJP government. However, it seemed like a publicity stunt as the original version was never really used to troll the government as such. The film is expected to have the best opening but it won’t be more than Rs 4.50-5 crore. A good word of mouth will help the film to do better.

KARWAAN: This is a road trip film and serves as the debut of South star Dulquer Salmaan and also the proper Bollywood launch of internet star and Marathi actor Mithila Palkar. However, it’s Irrfan Khan who’s the biggest draw, more so as he’s diagnosed with cancer and is out of India for treatment since a long time. The trailer of the film has been appreciated a lot and it looks like a nice, fun ride. However, it looks niche and hence it can work only in multiplexes of urban centres. It should open in the Rs. 2-3 crore range, as it usually happens with Irrfan Khan films. It really requires to be a good film in order to survive.

MULK: It stars Rishi Kapoor, Taapsee Pannu, Prateik Babbar and Rajat Kapoor and looks like a powerful courtroom drama. Directed by Anubhav Sinha, it raises lot of important issues and talks about the Hindi-Muslim divide, a burning topic in today’s times. Sadly, the film looks too serious. Although Rishi has done the rounds of prominent news channels and given powerful interviews, it hasn’t worked much. It’s opening will be similar to Karwaan or even less. The only way it can work big time is if it’s out of the world, as good as Taapsee’s previous courtroom flick Pink.