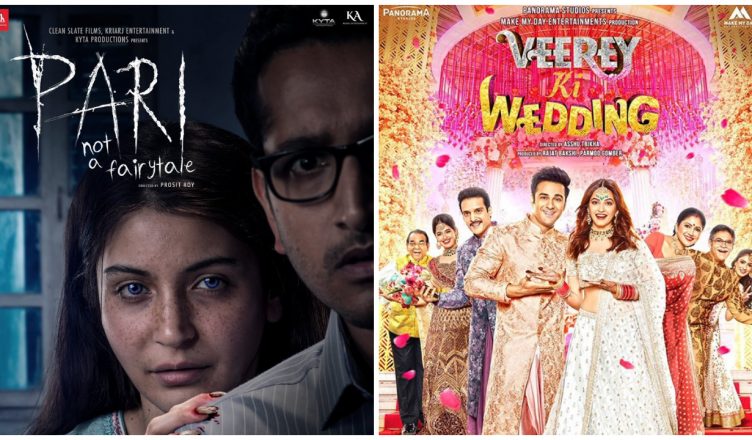 TWO NOT-SO-PROMOTED FILMS TO TRY THEIR LUCK THIS FRIDAY!

An unusual trend is on the rise this year. Often, we see films being moderately, if not heavily promoted everywhere. This is especially for films starring known and famous names. But now things are changing. Filmmakers are not spending their time, money and energy extensively on film promotions. It started with Padmaavat whose promotions stopped after it was delayed indefinitely. The makers didn’t start promotions even when its new release date was announced. Obviously it was done as they didn’t want to fan the controversy further. But last week’s Welcome To New York also went down a similar road. The promotions were unusually minimal and it affected the film big time. And now, both the films releasing this Friday also get added to this list. My analysis:

PARI: This is the first film of Anushka Sharma after her marriage to Virat Kohli in December 2017. She herself has produced it and stars her in the lead along with Kahaani actor Parambrata Chatterjee. Debutant director Prosit Roy has helmed it and has set it in Kolkata. This is quite novel as most of the horror films in Bollywood are either set in Mumbai or in the remote hills. The trailer looks intriguing. It was launched just 2-3 weeks ago and after that, they unveiled 30 second teasers. That’s it! No songs were unveiled, maybe because it’s a songless film. There have been no press conferences, first look launch, interviews etc! In a way, it has heightened the curiosity. But at the same time, the awareness of this film is dangerously low. Many are not even aware that the film is up for release. Of course, by Friday, the awareness will grow. But the opening will be poor. Also, it’s Holi on that day and hence, few theatres might be shut in the morning. But if reports are positive, then the film can pick up significantly on Day 2 and then can do well in the weekdays. Most of the A-league actresses won’t do such a film. It’s brave of Anushka Sharma to attempt such a film and here’s hoping it works!

VEERE KI WEDDING: The film first made news when it was unveiled that its makers are unhappy since their film’s title is similar to the upcoming flick Veere Di Wedding. It stars Pulkit Samrat, Jimmy Sheirgill and Kriti Kharbanda and is directed by Ashuu Trikha, who has given well-made but not-so-memorable films like Deewanapan and Baabarr. The trailer is poor and the songs have made no impact. The makers have attempted to cash on Jimmy’s image of not getting girls in his films and that aspect is the best thing about the trailer. But it’s not enough to attract audiences to cinemas. The promotional activities have been negligible. In fact, the awareness and excitement for Veere Ki Wedding is far less than Pari, despite it being more commercial and family-friendly. It stands no chance at all at the box office.