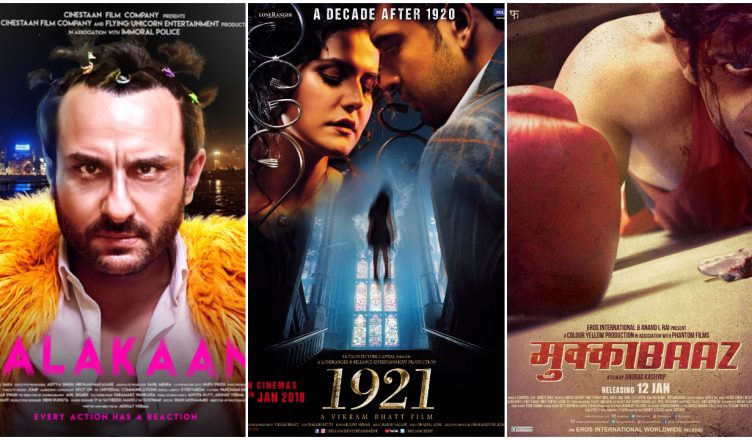 3 FILMS TO TRY THEIR LUCK TOMORROW!

It’s the second Friday of the year and hence, it’s the time when the significant films will start arriving in cinemas. Tomorrow, three films will be trying their luck at the box office. My analysis:

MUKKABAAZ: It’s directed by Anurag Kashyap, after the disastrous Bombay Velvet in 2015. This time, Anurag takes up a film that’s smaller in scale and cost, which has always been his domain. Vineet Kumar Singh is the lead along with newbie Zoya Hussain. Jimmy Sheirgill and Ravi Kishan also feature in the film in crucial roles. The film is a story of a boxer but isn’t any other sports film. It is at a heart love story and also tackles about caste system that’s deeply rooted in our society. The buzz is very limited but thankfully, the costs are limited. The opening will be very low and if reports are positive among the people, then it might have a chance at the box office.

KAALAKAANDI: It is a dark comedy, replete with abuses, in the zone of Delhi Belly. Incidentally, Delhi Belly writer Akshat Verma makes his directorial debut with this film. It has an ensemble cast comprising of Saif Ali Khan, Akshay Oberoi, Sobhita Dhulipala, Kunaal Roy Kapur, Deepak Dobriyal, Vijay Raaz, Neil Bhoopalam and Shenaz Treasurywala. The film is set in one night and has multiple tracks. The film was finished long back but faced issues at the Censor Board. Fortunately, the Tribunal passed the film with just one or two cut. But then the makers found it difficult to release the film in theatres and at one point, they even contemplated releasing it on online streaming platforms. Thankfully, that didn’t happen and now the film is up for release. The film has niche content but it is carrying excellent reports. Even Aamir Khan raved about it and he rarely does so for a film. The opening might not be great but if response is good, it can work in a big way in the high-end multiplexes which will be enough for the film to recover its investment.

1921: After the horror franchise 1920, Vikram Bhatt has now unveiled 1921, also a horror flick. Starring Zareen Khan and Karan Kundrra, it promises loads of horror, minus sex. But from the trailers, it looks anything but scary. Both Vikram Bhatt and Zareen Khan’s last releases – Raaz Reboot and Aksar 2 respectively – were flops and it doesn’t seem that this film will help in any way. But you never know – 1920 has been a hit franchise, with only the last part not working. Even 1920: Evil Returns, the second part of 1920, didn’t look exciting but people went for it as it had the horror element. So, 1921 can also get the initial crowd perhaps but as of now, chances seem remote.