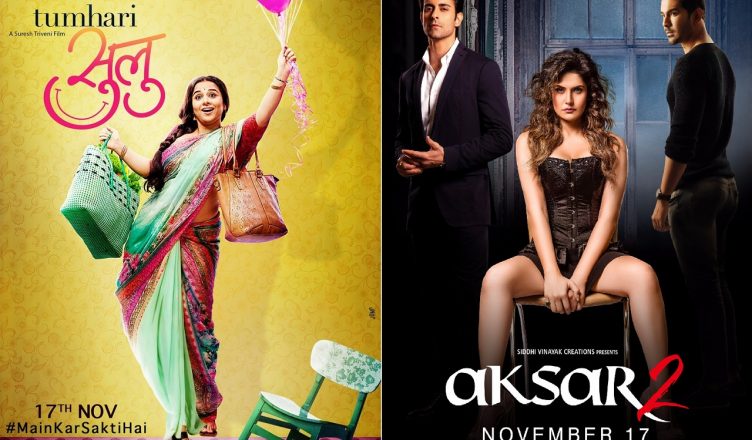 Here comes another week of November and just like last Friday, it will have two medium-budget films trying their luck. As compared to last week, both films are expected to open better. My views:

TUMHARI SULU: It is a slice-of-life story of a housewife who turns into an RJ of a late-night adult show. Vidya Balan stars in this role and from the trailers, she seem to be enjoying herself. The trailer in fact is very endearing and has connected with a lot of people. The songs – Hawa Hawaai and Ban Ja Rani – are reworked versions of popular tracks and have caught attention. Sadly, the film is not the usual entertainer. Hence, the hype is there but it’s limited. The opening will be not so great but can pick up if word of mouth is positive. It has scarce competition from Aksar 2 and also next week is more or less competition-free. Hence, it can break even and emerge as a decent success of Vidya Balan after Kahaani.

AKSAR 2: It is the second part of Aksar, a film released in 2006 that isn’t memorable at all. Only the song – Jhalak Dikhla Ja – had caught on but the film as such was never memorable. It’s bewildering that a sequel was made of this film! The trailer is strictly okay but it has some erotic scenes and that should help. It stars Zareen Khan in leading role along with Gautam Rode, Lillete Dubey and Mohit Madaan. Songs haven’t worked at all. Aksar 2 was scheduled to release on October 6 at first. It was the day when Julie 2 was also to release. That would have affected Aksar 2 heavily as Julie 2 seems hotter. Now Julie 2 is releasing next week and hence Aksar 2 has some chance, at least in ‘B’ and ‘C’ centres.

WHICH FILM WOULD YOU LIKE TO SEE AND WHY?