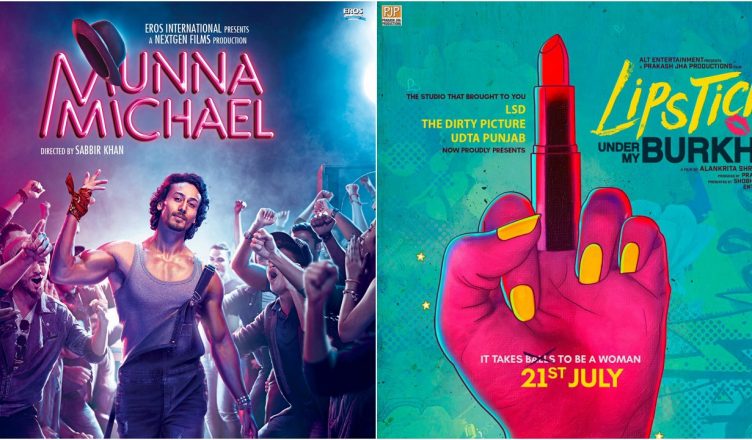 The much talked about Jagga Jasoos has released and as feared, it failed to make a mark at the box office. It has not been a good time for Bollywood since significant films like Raabta, Behen Hogi Teri and Bank Chor failed and now Jagga Jasoos too joins the list. Mom worked somehow but it hasn’t been a huge success. Now all hopes are pinned on tomorrow’s releases – Munna Michael and Lipstick Under My Burkha. My views on these films

MUNNA MICHAEL: It stars Tiger Shroff and marks his third collaboration with Sabbir Khan, who launched him in Heropanti and then also worked with him in last year’s super-hit film Baaghi. Newcomer Nidhhi Agerwal stars opposite Tiger but what’s more interesting is that even Nawazuddin Siddiqui is a part of it. From the trailers, Tiger-Nawazuddin’s scenes seem very interesting. The film has a dance element and also gives a tribute to Michael Jackson, who is idolized by Tiger. Not just MJ but Tiger also gives homage to his own father Jackie Shroff. Hence, Munna is shown as a resident of Teen Batti, where his dad once resided. Songs are catchy but haven’t become chartbusters. Action and dance scenes look great but it’s something that Tiger has done before. As a result, the excitement among fans is limited. Tiger-Sabbir’s last film Baaghi opened at approx 12 crore and it will be difficult for Munna Michael to cross this mark. Even if it opens in 8-10 crore range, it would be still good since costs are limited. If response is positive, the film can grow in the weekend and sustain well in weekdays, which will be enough for the movie to be called a Hit.

LIPSTICK UNDER MY BURKHA: It’s a new-age cinema starring Konkona Sen Sharma, Ratna Pathak Shah, Aahana Kumra and Plabita Borthakur. It is directed by Alankrita Shrivastava and produced by Prakash Jha. The film has toured many film festivals internationally and also was screened at the 18th Mumbai Film Festival. However, earlier this year, the film attracted maximum eyeballs after it was not passed by the Censor Board due to its adult content. The Censors also said that the material is ‘lady oriented’ as one of the reasons for not giving it a certificate. It snowballed into a huge controversy and finally, the film was passed reportedly with very minimal cuts. Thankfully, the soul of the film hasn’t been affected. What’s unfortunate is that it’s a niche film and hence, its reach would remain limited. It will mainly score in the metropolitan cities.