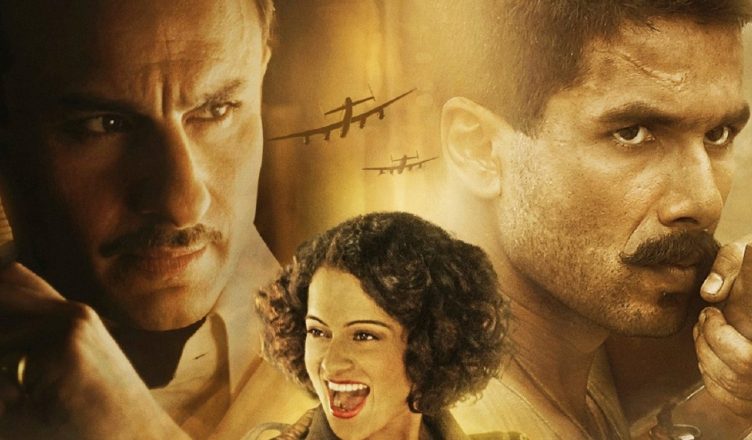 WILL RANGOON WIN DESPITE HIGH COSTS?

One of the grandest films of the year, Rangoon, is all set to release tomorrow. The film looks visually stunning but has a lot of obstacles in its path. It is directed by Vishal Bhardwaj and stars Saif Ali Khan, Shahid Kapoor and Kangana Ranaut. This is the first time Vishal has teamed up with producer Sajid Nadiadwala. It is set in 1944 when the World War was at its peak. The production values and VFX are highly authentic and rich which gives the film a nice touch. The chemistry between Shahid and Kangana is especially sizzling. Songs sadly haven’t made any mark. Thankfully, it’s a solo release and with no major films releasing next week, Rangoon has 2 weeks to score at the ticket window.

Sadly, the film has enormous challenges. It’s not a conventional entertainer, as evident from the promos. Moreover, its cost is quite high. Hence, it has to really collect very well at the box office. Looking at the buzz, that seems unlikely although its collections can increase from Day 2 if response is positive. Even then, one wonders how it’ll manage to do more than 60-70 crores. In the past, films like Mirzya, Bombay Velvet, Mohenjo Daro etc also suffered for the same reason. All three of them were period dramas (Mirzya was partly based in today’s times) and hence had huge budgets. But the content was not exactly audience friendly. Whether Rangoon joins this ‘black list’ or goes against the tide and manages to rock the box office remains to be seen!

WOULD YOU LIKE TO SEE RANGOON AND WHY? DO LET ME KNOW!