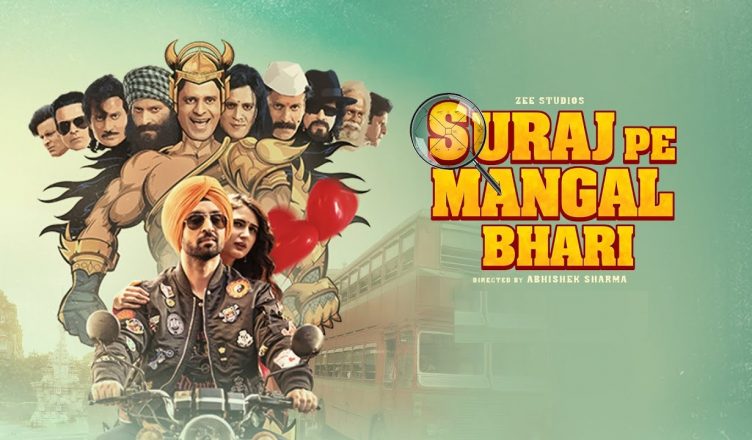 Suraj Pe Mangal Bhari (releasing in THEATRES on Sunday November 15) is a fun film that meets expectations though doesn’t exceed them. I had feared that the trailer had revealed a lot of story but thankfully, that’s not the case. Writers Shokhi Banerjee, Rohan Shankar and director Abhishek Sharma (of Parmanu and Tere Bin Laden fame) deserve brownie points for keeping the mood light throughout. Not even once does the film get heavy. The celebration of middle-class lifestyle of the bygone era reminds one of Hrishikesh Mukherjee and Basu Chatterjee’s films. Also, the depiction of Marathi culture is impressive. The characters are also quirky and well fleshed out. On the flipside, the film drops after a great beginning and picks up around 20 minutes before interval. A few developments are difficult to digest and are too unconvincing. The humour quotient is limited. The climax saves the day. Talking of performances, Manoj Bajpayee is excellent and his entry itself is quite funny. He has played characters with comic touch before in Gangs Of Wasseypur, The Family Man etc but mostly, he’s known for his serious image. Here, he plays a very wacky guy and it’s surely one of his most memorable performances. Diljit Dosanjh is first-rate and his comic timing is spot on, as always. Fatima Sana Shaikh’s expressions in a few scenes were a bit off, but she manages to deliver an overall fine performance. Supriya Pilgaonkar contributes to the humour. Annu Kapoor is superb and one wishes he had a longer role. Manuj Sharma is apt as Diljit’s sidekick. Neha Pendse looks beautiful and plays a crucial part with panache. Vijay Raaz is the funniest character of the film. Some of his actions don’t make sense actually. One wishes he had better to do in the film. Surely, a character that deserves a spin-off! Karishma Tanna is sizzling in the item song ‘Basanti’, also the best song of the lot. All in all, Suraj Pe Mangal Bhari is an ideal family entertainer to watch this Diwali in cinemas. Zee Studios has taken a huge risk by deciding to release this film in theatres. Here’s hoping audiences come out in healthy numbers so that this well-intentioned venture emerges as a success, despite social distancing limitations!