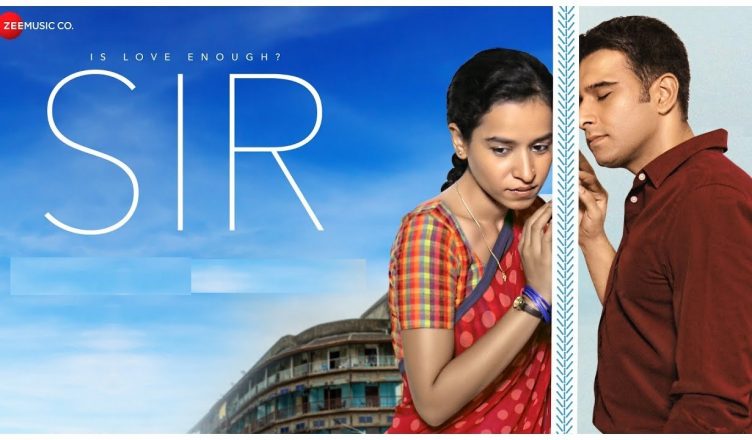 The Diwali week is usually dominated by some of the biggest films of the year. But this year is going to be different. With biggies preferring to wait it out until there’s some degree of normalcy, the smaller films will have a field day in cinemas during the festival of lights. The one to take advantage of this opportunity is ‘Is Love Enough? – SIR’. The film has made waves internationally and is a highly acclaimed film. It was scheduled to be released on March 20, 2020 but the lockdown ruined all plans. With cinemas now open in most parts of the country, ‘Is Love Enough? – SIR’ made it quietly to cinemas today. And it can be a film that’s worth making a visit to the theatre!

The story of the film: Ratna (Tillotama Shome) is born and brought up in a village in Maharashtra. She was married early and became a widow at the age of 19. Everyone felt her life was finished. Proving her naysayers wrong, she comes to Mumbai and gets employed as a househelp in the house of Ashwin (Vivek Gomber). Ashwin was settled in the USA. But the demise of his brother prompted him to return and join his father (Rahul Vohra) in his business. He also is about to get married in a different city to his girlfriend. Ratna goes to her village during that time. But her holiday is cut short as Ashwin breaks his marriage and returns. Ratna, meanwhile, is trying to learn tailoring to fulfil her dream of becoming a fashion designer. With Ashwin’s approval, she begins to work for a tailor for a few hours daily after completing the household chores. She also motivates Ashwin and encourages him to move on with life. Ashwin appreciates the gesture. Soon, both get quite close.

‘Is Love Enough? – SIR’ begins on an interesting note as Ashwin’s marriage is called off and he returns dejected. Slowly and gradually, the director acquaints the viewers with the characters, their back stories, their dreams, their fears etc. Nothing much happens in the first half of this 101 minute long film but it still engages. The second half is when the characters cross the so-called line and this is where things get better. The film ends on a poignant and yet heartwarming note.

Rohena Gera‘s story is very novel and impressive. It does remind one a bit of the anthology flick Lust Stories and also the acclaimed movie Roma. But the writer has peppered the narrative with many original plot points. Rohena Gera‘s screenplay is slow yet beautiful. She takes her time to explain the changing dynamics between the lead characters and it works. As a rushed job, this wouldn’t have worked. Rohena Gera‘s dialogues are minimal and effective.

Rohena Gera‘s direction is superlative and does justice to the script. She raises some important points about class divide, desire of people in villages to move to the city, the need to be financially independent, following your dreams etc. She also lays bare the fact that no matter how progressive we become, the fear of ‘what-will-people-say’ might not leave us. On the flipside, a few developments are too sudden, especially Ashwin’s decision to break off the wedding. No explanation is given at all. The same happens in the last 15 minutes. The consistency of the film’s pace breaks here.

Speaking of performances, Tillotama Shome leaves a tremendous mark. She looks every inch the character that she was essaying. It’s amazing to see her silences and hesitations, especially in scenes when she’s speaking to Vivek and is being cautious, making sure she doesn’t breach the ‘line’. Vivek Gomber gets to play a heartwarming and an adorable character and he infuses life into it beautifully. It’s also great to see how nicely he communicates with his silences. Of course, his dialogue delivery is spot on and same goes for Tillotama as well. In fact, both speak so impeccably that you feel like listening to them all day long! Geetanjali Kulkarni (Laxmi) is dependable as always. Bhagyashree Pandit (Choti) is decent. Chandrachoor Rai (Vicky; Ashwin’s friend) makes his presence felt, especially in the pre-climax. Anupria Goenka (Ankita) is memorable, despite being in two (contrasting) sequences. Bachan Pachera (Tailor) is quite good. Rahul Vohra, Divya Seth Shah (Ashwin’s mother), Dilnaz Irani (Nandita; Ashwin’s sister), Alok Chaturvedi (Watchman) and Saharsh Kumar Shukla (Sabina’s driver) are fair in their cameo appearances.

The songs ‘Jeene Mein Kya Jaata Hai’ and ‘Zindagi Ka Feel’ (Raghav Vagav) suit the narrative. Pierre Avia‘s background score is subtle and impactful. Dominique Colin‘s cinematography is splendid. The house scenes are well captured and in no time, one is able to more or less memorize the place. Also, it’s good to see that while most films are shot either in South Mumbai or the suburbs, this one is mostly set in the central part of the city. Parul Sondh‘s production design is appropriate. Kimneineng Kipgen and Chetna Rawat‘s costumes are straight out of life. Jacques Comets‘s editing is ideal for a film of this sort.

Some of the best scenes of the film:
1. Ashwin apologizing to Ratna for his sister’s behaviour
2. Ratna informs Ashwin about her past
3. Ratna saves Ashwin by lying on the phone (sweet scene!)
4. Ashwin and Ratna’s conversation in the kitchen about life in the USA
5. Ratna clarifies when Ashwin sees her trying her creation in his room
6. Ashwin gifts magazines and sewing china to Ratna
7. Ratna gifts a shirt to Ashwin
8. Ratna dances during Ganpati visarjan and the scene thereafter
9. Ratna and Ashwin at the rooftop
10. The last 20 minutes of the film

On the whole, ‘Is Love Enough? – SIR’ is India’s answer to Roma. It would have been pleasure watching it in a film festival with like-minded moviegoers and then clapping loudly when the credits would roll. A conversation with writer-director Rohena Gera post the screening would have been like an icing on the cake. Nevertheless, it’s great that it has been released in cinemas. Sometimes, it’s nice to watch such films on the big screen and not on an OTT platform. Do give it a try if it has been released in your city!