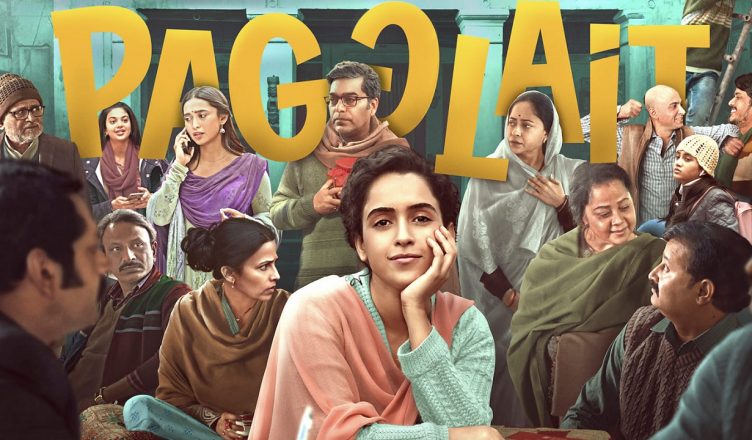 Pagglait’s initial scenes instantly remind one of Ramprasad Ki Tehrvi. The setting and even the house are eerily similar in both the films. But in less than 10 minutes, all the comparisons go out of the window. The quirky characters and the constant shift in the tone from comic to serious is well managed by writer-director Umesh Bist. While the first half is breezy and light, some of the conflicts in the second half seem a bit sudden. The climax is a big surprise but the manner in which it got linked to women empowerment should have been better explained or rather it should have infused gradually in the film. Pagglait is embellished with some fine performances. Sanya Malhotra is apt for the part and is absolutely riveting in some of the scenes. There’s no doubt that she is one of the finest actresses today. Shruti Sharma (Nazia Zaidi) is natural. Sayani Gupta (Akansha Roy) gets to play a brilliant part and nails it. Raghubir Yadav (Papu Tayaji) is great as the irritating and hypocritical uncle. Ashutosh Rana (Shivendra Giri) is flawless while Sheebha Chadha (Usha) is just right. Jameel Khan (Ghanshyam) stands out because of his characterization. Rajesh Tailang (Tarun) has a late entry but leaves a mark. Chetan Sharma (Alok Giri) is fine but an important scene in pre-climax leaves viewers confused about his character. Aasif Khan (Parchun) is dependable. Ashlesha Thakur (Aditi) and Sachin Chaudhary (Achint) are lovely as the kids. Sharib Hashmi (B K Arora) as expected rocks, in a cameo. Meghna Malik (Tulika), Nakul Roshan Sahdev (Aditya Giri), Natasha Rastogi (Alka Pandey), Bhupesh Pandya (Girish Pandey), Yamini Singh (Janaki Bua) and Ananya Khare (Tarun’s wife Rashmi) are decent. And finally, Saroj Singh (Dadi) is adorable! All in all, despite some blemishes, Pagglait is worth a watch for it’s writing, execution and of course, the performances.