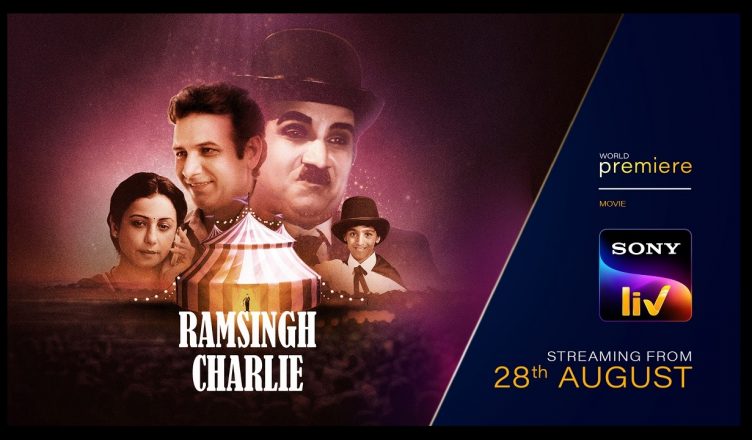 Growing up, a visit to a circus was a must for most of us. It was an important form of entertainment along with cinema, theatre etc. But while these avenues exist even today and are thriving, the business of circus has taken a beating. In fact, when was the last any of us visited a circus? Most of us would not be able to recollect. Filmistaan and Jawaani Jaaneman director Nitin Kakkar’s film Ram Singh Charlie focuses on this dying art and a lot more. The climax is a downer but the film has enough plusses that make it worth watching!

The story of the movie: Ram Singh (Kumud Mishra) works in the Jango Circus wherein he plays Charlie Chaplin. Hence, he’s also refered to as Charlie. His father too worked in the same circus, owned by the kind-hearted lady Masterji (Salima Raza). Ram Singh is married to Kajri (Divya Dutta) and has a son, Chintu (Rohit Rokhade) and both of them also work in the circus. Things are going fine until one day, Masterji’s son Nabeel (Akarsh Khurana) shuts down the circus due to financial losses. Ram Singh then starts hunting for a job in the few other surviving circuses in the city of Kolkata. He fails to find a job and with no other option, he turns into a hand-pulled rickshaw wallah. The Charlie inside Ram Singh soon fades into oblivion. Ram Singh turns cynical and pretends to be a realist. He bumps into Masterji one day who reminds him that he wanted to build his own circus some day and that he should work towards this dream. But the harsh realities of life have made Ram Singh give up on his dream, well, not entirely.

Ram Singh Charlie begins on an intriguing note, showing the protagonist as the rickshaw puller who still has the circus performer in him alive. The flashback portions of the circus shutting down and Ram Singh hunting for employment keep the interest going. The entire track of Ram Singh turning into a hen for an entertainment show is very well executed. The film goes on a high when he performs in his son’s school and realizes how much he has missed being a performer. This and the scene after that takes the film to a high. One expects the finale to be even better. But alas, the film takes a very disappointing turn in the climax. The narrative doesn’t get summed up well and is sure to break your heart because the film had so much potential.

The performances however are exemplary. Kumud Mishra is outstanding and it’s good to see that he finally got a lead part. He goes totally into the skin of his character and plays various shades convincingly – be it the version of Charlie Chaplin or the hand-pulled rickshaw rider. The latter reminds one of Balraj Sahni’s legendary act in Do Bigha Zamin and Kumud manages to reach to that level. Surely one of the finest performances of the year! Salima Raza is also terrific and leaves a tremendous mark in a supporting role. Her look and the way of approaching the part is just too good. Divya Dutta lends able support and is lovely as usual. One wishes that she had more screen time. Rohit Rokhade is decent. Akarsh Khurana suits the role to the T. Farrukh Seyer (Shahjehan) is confident but his character arc is difficult to digest. Surendra Rajan (Jaidev, violin player) is loveable. Purnanand Wandekar (Jhumroo, the mute employee) does well. Lilliput (Short) and K K Goswami (Cut) are decent and their track is moving. Avinash Gautam (Fahim) is okay. Sharib Hashmi (Raghunath) is very endearing and cute in the cameo. Hemwant Kumar Tiwari (Older Chintu) is hardly there and it’s during his track where the film falters majorly. Ujjwal Chopra (little kid Protima’s father) is fair. Saanand Verma (Chicket manager) is entertaining. Inaamulhaq (Emcee for Chicket match) has a blink-and-miss appearance but his commentary is fine.

Music is situational. ‘Mela’, ‘Ratiya’ and ‘Jeene Ko’ are well utilized. However, it’s Siddharth Mahadevan, Soumil Shringapure and Qaran Mehta‘s background score that enhances impact in several scenes. Subhranshu Das and Madhav Salunkhe‘s cinematography is splendid. Some of the long takes and scenes of Kumud pulling the rickshaw are exceptional. Urvi Ashar and Shipra Rawal‘s art direction is appropriate. Prashant M Kamble‘s make-up deserves praise. Payal Ashar‘s costumes are first-rate. Shachindra Vats‘s editing is fine for most parts of the film but goes a bit haywire in the last 20 minutes.

Nitin Kakkar‘s direction is simple and uncomplicated. And he shows his brilliance in some of the scenes, which adds to the impact. He also keeps the duration and packs in a lot in 109 minutes. What also amazes is how that he has managed to make films in different genres and has exceled almost each and every time!

On the whole, Ram Singh Charlie is a heartwarming and touching film which is embellished with some fine performances. The climax is disappointing and yet, the film is worth a watch, at least once!