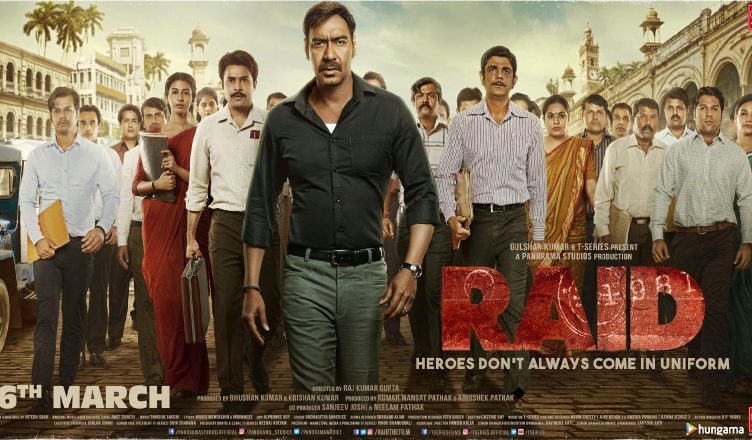 The burning issue of black money has always been a prominent one but it got a push after the government decided to go for demonetization in 2016. It’s no surprise that it always shows up in films from time to time. The latest flick to show this aspect is Raid, directed by Raj Kumar Gupta, who has proved his worth in the past with films like Aamir and No One Killed Jessica. He had faltered with his last film Ghanchakkar but with Raid, he has come back firmly on track as it emerges as a paisa vasool thrilling fare!

The story of the movie: The year is 1981. Amay Patnaik (Ajay Devgn) is an honest income tax officer who has faced 49 transfers in 7 years. His latest transfer has brought him to Lucknow. His wife Malini (Ileana D’Cruz) is very understanding and loving although she always fears for Amay’s safefty. Thanks to a tip-off, he finds out that the MP from Sitagarh, Rameshwar Singh aka Tauji (Saurabh Shukla) has loads of undeclared income. He secretly gets the orders and goes with his team to raid Tauji’s house. Tauji however is quite shrewd and he challenges Amay to find anything that even remotely comes under black money.

Raid is just 2 hours long and packs in a lot. The film begins on a rocking note that sets the mood. Amay’s honesty is very well explained in no time and also the introduction of Tauji is lovely. The loving bond between Amay and Malini and the mood at the IT office is also neatly and quickly established. Needless to fun, the fun begins once Amay reaches the ‘White House’, where Tauji resides. From here, the film goes on another high. The manner in which Tauji attempts to play mind games and intimidates Amay and the manner in which Amay refuses to give up despite reaching a dead end almost makes for a great watch. The pre-interval sequence is surprisingly quite funny – in fact it’s bound to bring the house down! The madness continues in the second half as the game gets even more serious. Sadly, the film drops at this point. Also, a few developments are quite unconvincing. But the film picks up very well in the climax, which raises tension levels quite high. The finale however is a bit underwhelming but the film ends on a fair and justified note.

Raid belongs to Ajay Devgn and Saurabh Shukla’s towering performances, majorly. Ajay Devgn has proved his worth in all types of genres. Although he’s considered an ‘action hero’ primarily, with Raid, he shows his macho side just through dialogues and determination. And it works big time! It’s a pleasure to see him mouthing clapworthy dialogues, refusing to give up and even breaking down at select places – Amay Patnaik is a human after all. From his rugged, action avatar in Baadshaho to his madcap act in Golmaal Again to playing the honest and upright Amay Patnaik, all in less than a year – Ajay Devgn shows yet again that he’s an all-rounder! Saurabh Shukla’s persona and look itself is a winner as he makes for a convincing evil politician! His character also has various shades and as expected, he plays his part very well. For a long time, he was stuck with the image of the good-hearted judge thanks to the Jolly LLB series but with Raid, that image is bound to break. Ileana D’Cruz has a smaller role as expected but she delivers a very genuine and earnest performance. And she looks lovely and her hair is nicely done.

Amit Sial (Lallan) leaves a huge mark. Gayathiri (Mukta) has the best role amongst the female IT officers. Sheeba Chadha (Prabha Devi) is efficient while Sulagana Panigrahi (Tara) has a crucial part and gives a great performance. Pushpa Joshi (Dadi) however makes the greatest impact among all the family members of Tauji. It’s unbelievable to know that this 85-year-old ‘actor’ has never faced the camera before. Flora Jacob’s (Prime Minister) face isn’t shown but she manages to impress with her dialogue delivery and resemblance to Indira Gandhi. Others do a fine job as well.

There are 4 songs in the film out of which 2 are fine while 2 are arguably wasted. Sanu Ek Pal Chain and Nit Khair Manga are not fully played and move away quickly. But no major complaints as such as these tracks help in establishing the relationship of Amay with Malini. Black is like a theme song while Jhuk Na Paunga comes at a decisive point in the film. Amit Trivedi’s background score is heroic and exhilarating. Alphonse Roy’s cinematography is superb and captures all the details very well. Rita Ghosh’s production design is quite authentic. All the currency notes, jewelry and other items of the 80s look quite real. Bodhaditya Banerjee’s editing is consistent at most of the places. Ameira Punvani’s costumes are elegant, especially the ones worn by Ileana D’Cruz.

Ritesh Shah’s story is superb as it enlightens audiences about how these raids used to be conducted them and the challenges faced by these fearless officials. Ritesh Shah’s screenplay is fast-paced, simple and massy. A similar film based in 80s and dealing with raids was Special 26 and the writer ensures that Raid doesn’t give viewers a déjà vu of that flick. However, few developments are quite unconvincing. Also, the way things unfold in the climax, one expects the film to end on a certain note. But all of a sudden, the film takes a sharp turn and the film goes on another track. Of course, one can say that it’s a way to heighten the tension and bring the unpredictable factor. But it is not entirely convincing. Ritesh Shah’s dialogues however are one of the best parts of the film. The one-liners are sharp, acidic and clap inducing! Raj Kumar Gupta’s direction is in sync with the mood and feel of the film. A film like Raid deserves a massy style of execution but not too much. This balance is very well achieved by Raj Kumar. The manner in which he establishes the base of the story in no time and then gets down to business is praiseworthy. He yet again proves his capability and here’s hoping that we won’t have to wait for 4-5 years to see his next flick!

Some of the best scenes:
1. Amay at the Courtyard club
2. Amay’s first day at IT office in Lucknow
3. Amay on the way to Sitagarh
4. Amay meets Tauji’s family members for the first time
5. The raid begins
6. Amay finally gets an important clue
7. Tauji takes the gun in his hand (one of the greatest scenes ever)
8. All scenes of Dadi
9. Amay talks to the Prime Minister
10. Amay and Tauji’s conservation at night
11. The climax

On the whole, Raid is a paisa-vasool entertainer that has a lot for the masses despite the lead actor (known primarily for his action) is not beating up the baddies. Inspired by true events, the film enlightens viewers about the challenges faced by IT officials while conducting raids in the houses of ‘well connected’ people. But it’s told in an entertaining way and this surely makes Raid one of the best flicks of the year. The film has arrived with very little buzz but is bound to make a lot of noises with its word of mouth! Go raid your nearest theatre asap!