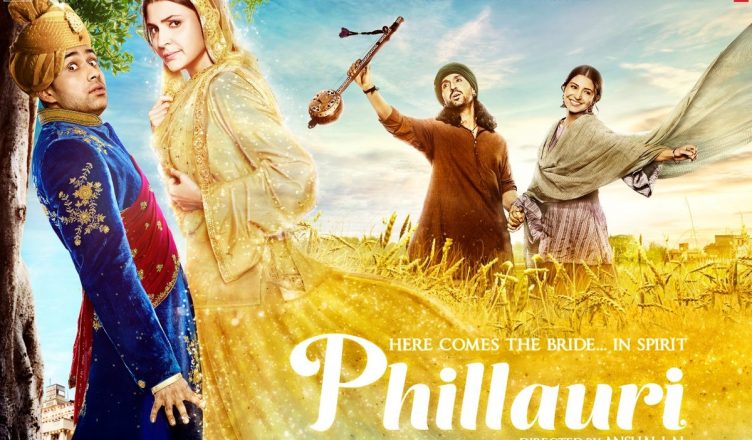 Despite being in the so-called ‘modern era’, it’s not uncommon to find the most educated of people believing in superstitions. When it comes to marriage, for a lot of people, one of the top questions on their mind is whether the boy or a girl is ‘manglik’. If the answer is in affirmative, it can cause pandemonium. The solution for it is equally bizarre and Phillauri deals with this aspect. However, things go awry for the ‘manglik’ boy leading to some unexpected circumstances. The idea is novel but the film sadly turns out to be an average fare!

The story of the movie: Kanan (Suraj Sharma) returns back from Canada to Amritsar after completing his studies to marry his childhood sweetheart Anu (Mehreen Pirzada). He’s told that since he’s a ‘manglik’, he’ll have to marry a tree (which would be later cut) and only then he should tie the knot with Anu. Sadly, a ghost Shashi (Anushka Sharma) resides in the tree with which Kanan is married to. Shashi hence gets into Kanan’s life which wreaks havoc since only he can see Shashi. He’s already unsure of marrying Anu so soon in his life and the entry of Shashi further causes damage.

Phillauri begins with a psychedelic dream sequence that seems very unconvincing. Thankfully, the dream ends soon and from here, the film begins to make a mark. The family members are neatly introduced and the fun moments in between raise laugh. The fun begins once Shashi makes an entry and scares the daylights out of Kanan. There’s a parallel track going on as well, when Shashi is alive and is in love with Phillauri (Diljit Dosanjh). The beginning of this track and setting is lovely but after a point, it fails to really engage. The romance between Shashi and Phillauri is not something that will really involve the audiences. On the other hand, the track of Kanan and Anu also begins to go off track. What exactly is Anu’s predicament is hard to decipher. The causes are laid out but there should have been some reason behind it which is not given. The film however is saved by the climax. The last 15-20 mins is when the unexpected happens and that really is quite gripping. The final scene is touching but it is stretched too much and that again hampers the impact.

Performance wise, Anushka Sharma gives a very restrained and effective performance. There have been friendly ghosts in the past in our films but Anushka manages to stand out from all of them. Even when not playing a ghost, she is lovely as the Phillaur village girl with big dreams. Diljit Dosanjh has a late entry but leaves a huge impact with his style, smile and overall performance. There’s something about him that makes him very endearing. Here’s hoping he continues to do a lot of Bollywood films! Suraj Sharma plays his role with elan. At some places, however, he overplays the grumpiness and the fault lies with the director more than him. Mehreen Pirzada gives a confident debut performance. She looks stunning and can go a long way. Nidhi Bisht (Shashi’s bestie), the TVF girl, gives a fine performance. The other actors that leave a mark are the ones playing Shashi’s brother, Phillauri’s friend and Anu’s alcoholic grandmother. The actor playing the househelp Piyush is fabulous and rocks the first 20 minutes of the film!

Shashwat Sachdev and Jasleen Royal’s music is quite soulful. But except Sahiba, no other song has a great recall value. Sahiba is the soul of the movie, beautifully blended and plays a crucial part in the narrative. Sameer Uddin’s background score is impressive. Vishal Sinha’s cinematography is neat. Meenal Agarwal’s production design is very praiseworthy, especially in Shashi-Phillauri track. The props of the bygone era add a great touch and also, not many period films show these items. VFX by Red Chillies also deserve lot of praise. Shashi the ghost is wonderfully presented on screen. Special mention should also go to Jallianwalla Bagh sequence – A great work by the entire team! Anvita Dutt’s story is quite nice but the screenplay is not very tight. Also, there are unconvincing moments that spoil the show to an extent. Anshai Lal’s direction is fine and he makes a nice debut. But at some places, he could have done better in engaging the audiences. Hopefully, he’ll do better in his next flick!

On the whole, Phillauri begins and ends well but the in-between portion is where it falters. Anushka Sharma and Diljit Dosanjh deliver great performances while the song Sahiba is highly soulful and well placed in the movie. The film however is too long, stretched and unconvincing at places and this is surely going to impact the word of mouth!